"Indian Medical Association is shocked to note the blatant lie of WHO certification for a secret medicine launched by an entrepreneur in the presence of the Hon'ble Health Minister," the association said in a release. 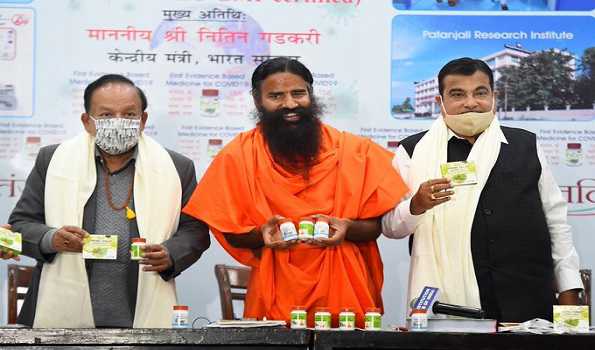 New Delhi: Indian Medical Association (IMA) on Monday rejected all claims by Yoga guru Baba Ramdev of his Ayurvedic medicine Coronil being first-evidence based medicine for Covid-19 and certified by the WHO and came down heavily on Union Health Minister Dr Harsh Vardhan for promoting such a claim.
“Indian Medical Association is shocked to note the blatant lie of WHO certification for a secret medicine launched by an entrepreneur in the presence of the Hon’ble Health Minister,” the association said in a release.
It mentioned that the World Health Organisation has clarified that it has neither reviewed nor certified the effectiveness of Patanjali’s Covid-19 medicine.
The IMA said all the projections of the said coronavirus medicine were false.
The association also criticised Dr Vardhan for participating in the launch event of Patanjali’s medicine and promoting it.
“As per the code of act of Medical Council of India,… no doctor can promote any drug,” the IMA said in the statement.
The IMA also stated that promoting any drug without the knowledge of its composition or which does not have its composition mentioned, is again unethical.
The association asked the Union Health Minister to make public the scientific evidence and data of clinical trials of the medicine.
If the Patanjali drug–Coronil–is so effective then why the government is spending Rs 35 thousand crores on the vaccination programme, the IMA questioned.
The association said it will ask the National Medical Commission to take the case suo motu and clarified that IMA is not against Ayurveda but adulterated drugs.
Ramdev had claimed that Coronil, manufactured by pharmaceutical company Patanjali, has received certification from the Ayush Ministry of a supportive medicine in the treatment of Covid-19.
Ramdev claimed that the medicine was based on a research work, whose research paper was released in an event here on Friday, also attended by Dr Vardhan and Union Transport Minister Nitin Gadkari.
He said the certification was issued by the Ayush Ministry as per the WHO’s certification scheme.
Patanjali in an official statement said, “Coronil has received the Certificate of Pharmaceutical Product (CoPP) from the Ayush section of Central Drugs Standard Control Organisation as per the WHO certification scheme.”
In the middle of last year, Pantajali had launched a “Coronil Kit” claiming it as an effective treatment in curing Covid-19. However, Patanjali medicine received huge criticism and questions were raised on research and trial work. Its claim was falsified by Union Ayush Ministry.