I was beaten up during my visit to Assam as a RSS leader: Shah

"I had come here for the program of the (Akhil Bharatiya) Vidyarthi Parishad, then we were beaten up a lot by Hiteswar Saikia (then Assam CM)..." 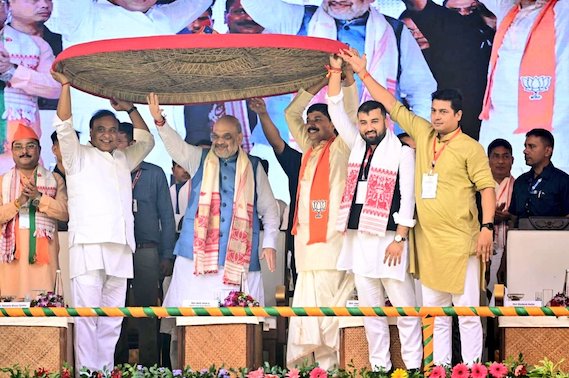 Guwahati: Union home minister Amit Shah on Saturday said that he along with other ABVP members were beaten up during his visit to Assam as a leader of the student wing of Rashtriya Swayamsevak Sangh (RSS) during his initial years in politics.

Addressing party workers in Guwahati, Shah said, “we were beaten up a lot by Hiteswar Saikia”, in an apparent reference to the police crackdown on protests by the Akhil Bharatiya Vidyarthi Parishad (ABVP) during the Congress government in the state.

“I had come here for the program of the (Akhil Bharatiya) Vidyarthi Parishad, then we were beaten up a lot by Hiteswar Saikia (then Assam CM)… We used to shout slogans like ‘Assam ki galiyan sooni hain, Indira Gandhi khooni hai’,” he said.

At that time it was not imagined that BJP would form the government in Assam twice on its own,” Shah said.

He asserted that Assam and the northeastern region marched ahead on the path of peace and development during the last eight years of BJP rule under Prime Minister Narendra Modi. The minister further alleged that seventy years of Congress rule had pushed the region to violence and anarchy but Modi’s leadership brought peace and helped the region join the mainstream.

“During Congress rule, there was a process of breaking India in the northeast and Congress witnessed it silently…For those who want to do ‘Bharat Jodo’, peace and development in the northeast is an example of how a country can be united without giving a single speech,” Shah said.