The protestors also threatened to organize movement against the BJP-IPFT alliance government in the state to restore democracy. 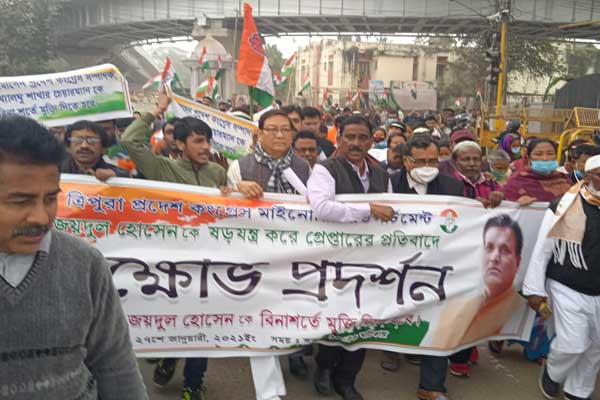 Agartala: The Congress organised a ‘Hunkaar rally’ to protest against the “slaughtering of democracy” and skyrocketing prices in Tripura Friday.

The protestors also threatened to organize movement against the BJP-IPFT alliance government in the state to restore democracy.

Addressing the rally, Congress Working Committee member and the party in-charge of Tripura, Kuljit Singh Nagra said the government has throttled democracy in the state by launching attacks on the workers and leaders of the opposition parties.

The government has butchered democracy by launching repeated attacks on the members and leaders of opposition parties. It has also indulged in corruptions in administration for their political interests, he told the rally.

Nagra said that during his visits to the far flung and hilly areas of the state he had found that there is acute crisis of drinking water, no jobs under MGNREGA, neither toilets nor gas connections.

They dont have ration cards. I want to ask Chief Minister Biplab Kumar Deb who will deliver benefits to these poor people of Tripura who are living in far-flung areas of the state.

Congress, he said, will intensify movement against the Biplab Deb government to topple it in the assembly elections due in the year 2023. With agency inputs