HP: Minor drowns in Swan river, mother rushes to save him but effort futile

In the process of saving her child, the woman also started drowning. Suddenly, seeing the woman drowning, a man jumped into the river and saved her, but by then the woman's son had drowned. 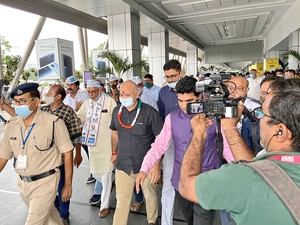 To save the child, his mother Karan Devi, wife of Priya Darshan Rishidev, a resident of Hal Punjabar also jumped into the river, but could not save her son.

In the process of saving her child, the woman also started drowning. Suddenly, seeing the woman drowning, a man jumped into the river and saved her, but by then the woman’s son had drowned.

On receiving the information, Khem Singh, in charge of Pandora police post reached the spot along with the police team and registered a case and started further investigation.

An official spokesman said the minor landed in Lower Punjab village to take bath in the Swan River on Tuesday evening. Unaware of the depth of the water, he went into the lap of water.

Seeing her son drowning, the mother of the minor standing nearby, also jumped into the water to save her son but she started drowning and was saved with great difficulty. At the same time, with the help of the local people, the woman and son were taken to the hospital where the woman was given first aid and was sent home, while the woman’s son was declared brought dead.

The Pandora police have taken the body to the hospital for postmortem examination.

A case has been registered and further investigation is on.

Keep the option of going to Courts as a last resort: CJI