Nossel said Rushdie had emailed her just hours before the incident, offering help with placements for Ukrainian writers. 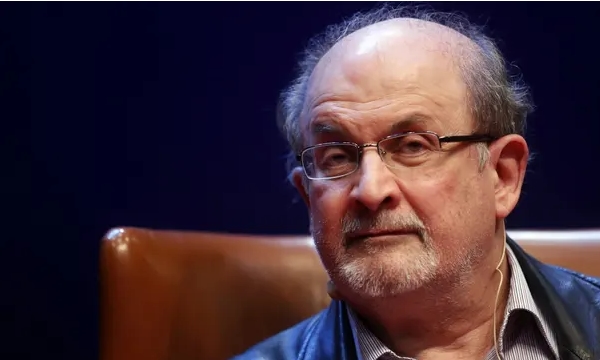 London: Authors around the world have expressed their shock and sadness at the attack on Salman Rushdie in New York state.

The stabbing came after years of Islamist death threats against Rushdie over The Satanic Verses, published in 1988.

Several British newspapers said Rushdie was stabbed 15 times at the New York event that left him bloodied as he collapsed on stage Friday evening.
Booker-prize-winning author Ian McEwan called it an “appalling attack” that “represents an assault on freedom of thought and speech”.

“Salman has been an inspirational defender of persecuted writers and journalists across the world. He is a fiery and generous spirit, a man of immense talent and courage and he will not be deterred,” BBC quoted him as saying.

Friend and fellow writer Lisa Appignanesi called the attack “ghastly and appalling”, adding that she hoped “he makes it through to give us more of his extraordinary imaginative intelligence”.

“My sense of Salman is he is a great and very courageous writer with enormous fictional intelligence, unsurpassed really,” she added.

“He has also supported other writers across the world who have been suffering from other sorts of pressures. For something like this to happen to a person like Rushdie, it’s really destabilizing for a lot of us,” she added.

Afghan-American author Khaled Hosseini wrote: “I’m utterly horrified by the cowardly attack on Salman Rushdie. I pray for his recovery. He is an essential voice and cannot be silenced.”

Writer Taslima Nasreen, who was forced to flee her home in Bangladesh after a court said her novel Lajja offended Muslim’s religious faith, said she now feared for her own safety.

Nossel said Rushdie had emailed her just hours before the incident, offering help with placements for Ukrainian writers.

“We hope and believe fervently that his essential voice cannot and will not be silenced,” she added.