Hope Amarinder Singh will not take any steps that can ‘damage’ Congress: Gehlot

In a message that he shared on social media, he asked Singh to listen to his "inner voice", and stressed the need to fight "Fascist forces". 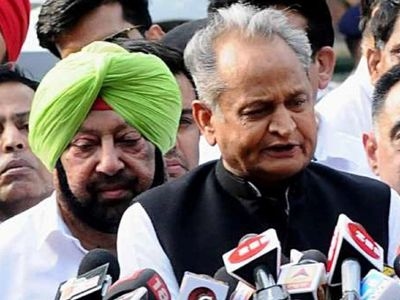 New Delhi: Rajasthan Chief Minister Ashok Gehlot on Sunday said he hoped Captain Amarinder Singh will not do anything that would damage the Congress party, a day after the Punjab CM stepped down.

In a message that he shared on social media, he asked Singh to listen to his “inner voice”, and stressed the need to fight “Fascist forces”.

“I hope Capt Amarinder Singh ji won’t take any steps that could cause damage to the Congress party. Capt Sahib himself said that the party made him CM and allowed him to continue as CM for nine and a half years. He has worked to the best of his capacity and served the people of Punjab,” he said.

He defended the decision taken by the party leadership, and said: “Sometimes the high command takes decisions in the interest of the party on the basis of feedback from MLAs and common people”.

He said he personally felt the Congress president selects CM in any state “at the risk of inviting displeasure of several leaders who are in the race for chief ministership”.

“However when the same is changed, he/she is displeased and holds the decision wrong,” he said.

“One should listen to one’s inner voice in such moments. I think that it should be a matter of concern for all countrymen as to what direction the country is heading due to Fascist forces,” he said, a day after Singh said he resigned as he felt ‘humiliated’, with the central leadership calling meetings of MLAs repeatedly.

Gehlot urged Singh to rise above self and think about national interest.

Capt. Amarinder Singh ji is a respected leader of the party and I hope that he will continue to work in the future also keeping the party’s interest in forefront,” he added.

Singh tendered his resignation from the post of Punjab CM on Saturday, after a meeting of the Congress Legislative Party in the state was called by the central leadership.

Talking to the media after his resignation he had said he will continue in politics, and take a decision on future course of action after talking to his associates.

Singh also launched an attack against Punjab Congress chief Navjot Singh Sidhu, calling him a “friend of Pakistan”, and warned the party leadership against appointing him the chief minister.

Speculations are rife over whether Singh will quit Congress and join another party, though he has said so far that he continues to be with the party.