He further alleged that under the patronage of the Yogi government, the state was reeling under a horrific form of an illegal, spurious, poisonous liquor business. 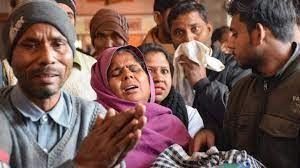 Lucknow: Uttar Pradesh Congress has hit out at the Yogi Adityanath government over the death of 400 people in four years due to hooch poisoning and alleged that the state has been turned into a ‘liquor state’ against the BJP’s claim of turning it into a ‘Ram Rajya’.

He further alleged that under the patronage of the Yogi government, the state was reeling under a horrific form of an illegal, spurious, poisonous liquor business.

Claiming that nearly 400 people have lost their lives after consuming hooch over the years, Mr Lallu while addressing a press conference here on Sunday said,” supply of poisonous liquor is due to nefarious nexus between the government, officials and liquor mafia which has taken away the lives of nearly four hundred people in the last four years in this BJP regime.

Lallu charged that the state government is ignoring the pleas of the ruling party MLAs, ministers and BJP office-bearers to prevent it but the government refused to act so far.

He questioned that why in spite of hundreds of deaths, no action has been taken against the officers who have been sitting in key posts of the state for the past several years.

The Congress leader said that even after the strict order by the High Court, the state government has failed to prevent it.

“The court has given instructions for stringent punitive action like gangster, life imprisonment, death penalty against those who sell fake, illegal and poisonous spurious liquor but the BJP government has failed to deliver,” Lallu said.