In a purported video that has since gone viral on social media, the leader of TNTJ Covai R Rahmatullah is seen saying that the judges will be responsible for their death if they are killed. 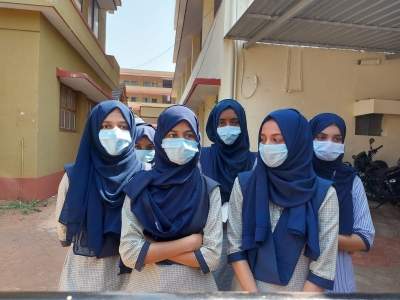 Bengaluru: Days after Karnataka High Court gave its verdict against hijab, Thowheed Jamat, an Islamist organisation, has issued death threats to the judges at a Madurai event.

In a purported video that has since gone viral on social media, the leader of TNTJ Covai R Rahmatullah is seen saying that the judges will be responsible for their death if they are killed.

“If judges get killed over the hijab case verdict, then, they will themselves be responsible for their death. “We are not afraid of Modi, Yogi and Amit shah. We are only afraid of Allah. Don’t make us lose patience. If we lose…,” Rahmatullah is heard saying in the purported video.

The verdict was pronounced by a three-judge bench comprising Karnataka Chief Justice Ritu Raj Awasthi, Justice Krishna S Dixit and Justice JM Khazi. Rahmatullah called the court’s verdict “invalid and illegal”, and also alleged that “the verdict was handed out on the behest of Union Home Minister Amit Shah”.

He also alleged that the verdict was delivered on personal beliefs of the judges, instead of Constitutional norms. In another tweet posted by Vishwatma, @HLKodo, a swarm of young children were raising violent slogans and giving death threats.

In the longer version of the video, Rahmatullah is seen saying that the sadhus are allowed to roam naked, but Muslim girls are disallowed to wear hijab. The video has been posted by Online Dhava 24X7 on Youtube. Rahmatullah is also seen saying that the Muslims are not afraid of Prime Minister Narendra Modi, Uttar Pradesh Chief Minister Yogi Adityanath and Shah, but afraid of Allah.

“If you attack Muslims, we will get on the ground. If we lose patience, then you won’t exist.”

Last month, eight Muslim girl students from a government pre-university college in Udupi filed a petition in Karnataka High Court to permit them to attend classes wearing hijab. They were denied entry into classes after the college management made it clear that the hijab is not part of the uniform.

Since then, the students have launched protests while being dressed in burkhas in defiance of the uniform rules implemented since December 2021. These students went on protest with the backing of the Campus Front of India (CFI) and the student wing of the Islamist outfit Popular Front of India (PFI) in October 2021.

The students have admitted being in consultation with the CFI. Subsequently, students approached the court, but the bench ruled that hijab is not an essential religious practice and not mandatory for Muslim women.

The Court also held that no case is made out for invalidating the Government Order of February 5, 2022. Following the verdict, liberals and Islamists took to social media to cast aspersions on the independence of the judiciary.