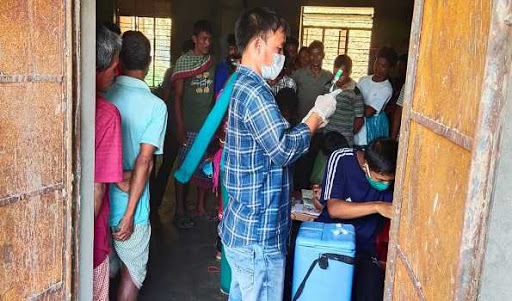 Udaipur: The daily COVID Vaccination Report of Gomati District in Tripura shows that Jamjuri Heath Sub Centre achieved appreciation from the district health administration for their performance in vaccinating a total of 672 people in a single day on Friday, officials said here on Sunday.

Sharing his view District Immunisation Officer for Gomati district Dr Joydeep Debbarma said all the staffs of health department under the district including Accredited Social Health Activists (ASHA) are doing their level best to complete the vaccination target in the district.

Gomati district is also among others eight districts in the state Tripura where the first COVID-19 case was detected last year. The district health administration has completed giving the first dose of the vaccination to nearly 72 per cent of the people and the second dose to 33 per cent people falling under the age group of 45-59 years.

The daily COVID-19 vaccination report of Gomati district published by Office of the Chief Medical Officer which reveals that the first dose of vacation has been administered to 35 per cent people for the age group of 18-44 years. The percentage completion of first dose of vaccination for the people falling under the age group 60 and above is 62 per cent and the second dose has been administered to 39 per cent for the same age group.

The sources of National Health Mission under Gomati district said all the measures are being implemented in order to complete vaccination as early as possible in the district.

A few days ago, the DM & Collector of Gomati District held a meeting with all the high officials of the district including MLAs, doctors and others, and directed them to strictly ensure all the preparation for vacation for people to control the pandemic.

A total of 69,301 people falling under 45-59 years old age group have received the first dose and 31,513 people have received second dose.

On Friday, 2,646 people were vaccinated of all age groups in a single day in accordance with the direction of Office of the Chief Medical Officer, Government of Tripura, Gomati District, Tepania.