The film is taking part in the ongoing 13th Indian Film Festival of Melbourne 2022 held from August 12 to 20 in Melbourne, Australia. The film was recommended by the renowned film scholar and curator Uma da Cunha. 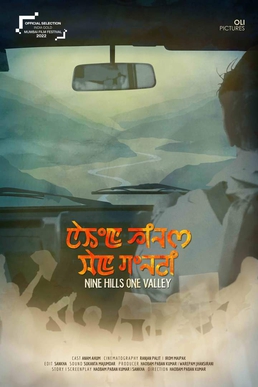 The film is taking part in the ongoing 13th Indian Film Festival of Melbourne 2022 held from August 12 to 20 in Melbourne, Australia. The film was recommended by the renowned film scholar and curator Uma da Cunha.

The film depicts Anam Ahum, a Tangkhul from the hill who travels to Imphal city in the valley to meet his daughter before she leaves for New Delhi in search of a job. During the course of the journey, Anam Ahum encounters different people and their stories, making the audience witness the brutishness of ethnic conflicts. Yet, in the face of distressing memories, hope thrives.

Nine Hills One Valley will have its Russian Premiere while screening in the 44th Moscow International Festival 2022 to be held from August 26 to September 2. In a letter sent to the filmmaker Paban Kumar, the festival authority stated that the selection committee had a specific interest in the film and recommended for screening in the festival.

After Moscow, Nine Hills One Valley will screen at the13th Annual Chicago South Asian Film Festival (CSAFF) 2022 which will take place from September 22 to 25, 2022, with the  curtain raiser on September 16, 2022, in downtown Chicago.

The next destination of Nine Hills One Valley will be at 15th International Film festival “East & West” which will take place in the Russian city of Orenburg from October 14 to 19, 2022.

The Festival is supported by the Russian Ministry of culture and the Governor of the Orenburg region. The Festival has already become a significant event in the cultural life of this country and also has received positive response from abroad. Orenburg is not randomly chosen to host the festival, since it is located at the intersection of geographical concepts of “Europe” and “Asia” and has historically been a model of a conglomeration of nationalities and national cultures.

The festival program is diverse and hosts the International Competition of features, Competition of new Russian films, retrospectives, entertainment program, master-classes and special sidebar events. The Festival management has the honor and the pleasure to invite the film- Nine Hills One Valley to take part in the special section “Contemporary Indian cinema”.

Haobam Paban Kumar is the leading independent filmmaker and producer in the North East India who entered into the profession after study in film direction from Satyajit Ray Film and Television Institute, Kolkata and honoured with the Legend of Indian Cinema by the Government of India on the occasion of the 50th International Film Festival India held in Goa.

He received the national film award in his debut feature- Loktak Lairembee and four national film awards in his documentaries- AFSPA 1958, Mr. India, Phum Shang and Pabung Syam. He is the first and only filmmaker from Manipur to have received the Golden Lotus in the National Film Awards in his AFSPA 1958 which bagged the best- non feature in 2008.

His one feature- Loktak Lairembee and six non-features- Ngaihak Lambida, The First Leap, AFSPA 1958, Mr. India, Phum Shang and Pabung Syam were selected in the Indian Panorama of the International Film Festival of India.