Chief Minister N Biren Singh said that “it is indeed a moment of immense pride and happiness to be an Indian as our country will complete 75 years of Independence 15th August 2022”. 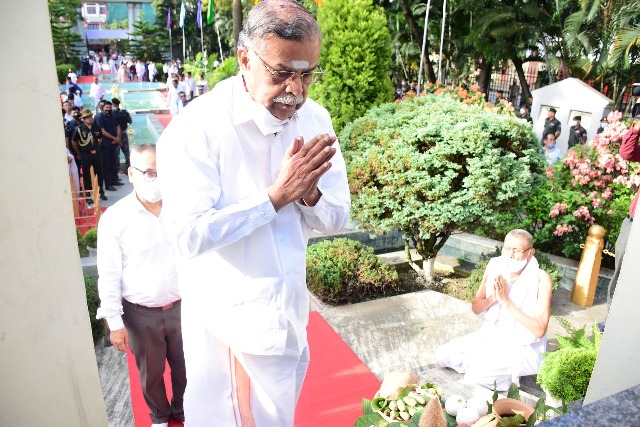 Imphal: Governor of Manipur, La Ganesan, Chief Minister N Biren Singh and a host of other ministers greeted the people on the occasion of the country’s 75th Independence which is being celebrated as Azadi ka Amrit Mahotsav

Governor Ganesan in his message said that the people of the country has been celebrating 15th August as Independence Day, remembering and paying homage to the sacrifices of the leaders and millions of their followers in the long struggle towards achieving the goal of Independence.

“During the last more than 7 decades after independence, India has made great strides in all fields and is targeting to be in the comity of leading nations of the world. Though major progress has been made in most of the socio-economic development areas all over the country, challenges still remain to be tackled. Technological strides have been made to ensure that no citizen is left hungry of illiterate  and progress is equitable.”

Governor Ganesan called on everyone to pledge to work that these efforts bear fr4uit so that all are provided with the support they need for sustenance and become responsible citizens. He also appealed to the people of the State to hoist the National Flag in their residences for three days, from August 13-15.

Chief Minister N Biren Singh said that “it is indeed a moment of immense pride and happiness to be an Indian as our country will complete 75 years of Independence 15th August 2022”.

“For the past more than one year, the glorious history of our people, culture and achievements have been celebrated across the country under the Azadi Ka Amrit Mahotsav initiative of Prime Minister Shri Narendra Modi”.  Biren Singh further added that this year the Har Ghar Tiranga campaign was initiated to inspire every Indian to hoist the National Flag, s symbol of national pride, at their homes as part of the Independence Day celebrations.

CM Biren then called on everyone to “rededicate ourselves to the idea of democracy and service to the nation and also harness the potential of being one of the youngest populations in the world to achieve our dream of self-reliance in every sector”.   Power Minister Th Biswajit greeting the people of the State on the occasion said that August 15 is a day of remembrance and dedication. “Remembrance of all those great patriots whose sacrifice made it possible for us to enjoy the fruits of freedom and dedication to the noble ideals of truth, non-violence, peace, solidarity and brotherhood which inspired our national struggle for freedom”.

Water Resources Minister, Awangbow Newmai in his message called on all to “remember the selfless sacrifices and unparalleled contributions made by many prominent personalities to achieve the Independence of India”.

Education Minister Th Basanta in his message stressed on the need to “join the nation by involving ourselves in the Azadi Ka Amrit Mahotsav initiative undertaken by the Government of India to mark 75 years of Independence and to celebrate its history, significance and importance in a special way this time”.

Commerce Minister Nemcha Kipgen, in her message called on all “to take inspiration from our national heroes who loved their motherland unconditionally and laid down their lives”. “let us pledge to protect our nation, to save the diversity our country has and to keep on the path of growth and development”, she added.