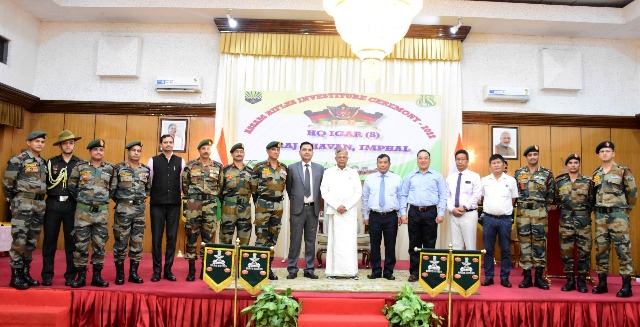 Imphal: Governor of Manipur & West Bengal La. Ganesan has said that Assam Rifles has been winning the hearts of the people of the North East through its dedication and service rendered to the region.

He was speaking at the Assam Rifles Investiture Ceremony-2022, held at the Darbar Hall of Raj Bhavan in Imphal today.

The Governor said Assam Rifles has been doing a tremendous job not only in security but also in many fields. The force took important roles in the two World Wars and also took lead roles in counter-insurgency operations, in maintaining law & order by helping civil administration, in disaster management and also in the socio-economic development of the far-flung areas. He continued that the force has been working actively in the difficult terrain of the North East.

In the glorious history of 187 years of its subsistence, Assam Rifles has been known for their dedication, honesty, achievement and most importantly for the sacrifices made by the valiant officers and jawans, in the country. Governor also thanked the medal-winning officers and jawans and expressed confidence that they will continue their efforts in the future too.

Inspector General, Assam Rifles (South), Major General Rajan Sharawat, said, the Assam Rifles Investiture Ceremony was introduced in 1957 by the then Governor of Meghalaya to encourage the valiant soldiers of the force. He said, the Ceremony is being held for the first time in Manipur. He said, the force has been contributing a lot in many fields in the country.

The force took part in the two World Wars and is also known for their bravery in Counter Insurgency Operations in North East, Jammu & Kashmir and also in Sri Lanka. The force has also been called as “Friends of North East” for the contributions made in the security and development of the region.

The Governor presented Gold & Silver Medals to 51 officers & jawans of Assam Rifles for the year 2021 & 2022, in the Ceremony. Deputy Commandant Rakesh Kumar of 43 AR and Assistant Commandant (MO) Oinam Sushil Singh of 36 AR may be mentioned in the list. Assam Rifles Brass Band Display was also shown after the Ceremony.