At least three trains were set on fire in Bihar and there were incidents of protestors clashing with police forces in Haryana and Uttar Pradesh. 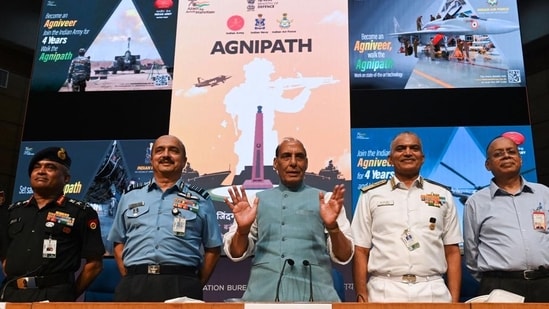 New Delhi: The government on Thursday tried to address the myths surrounding the newly- launched Agnipath scheme of recruitment in the three Services, even as protests against the scheme turned violent in several parts of the country.

At least three trains were set on fire in Bihar and there were incidents of protestors clashing with police forces in Haryana and Uttar Pradesh.

The government’s citizen engagement platform MyGovIndia came up with a short video on social media, which made an attempt to clear the doubts on the scheme to placate the agitators.

“Beware of the lies being spread about the Agnipath scheme. Learn how this scheme will open the doors of opportunities for the youth,” the platform said on Twitter.

The video tried to prove that the scheme will provide a great opportunity to serve the armed forces to the youth and that the exposure to discipline during the transformative years of their lives will lay the foundation for a successful life.

The video first talked about the questions being raised on the scheme and then made an attempt to answer them.

“Those who spread confusion are asking – employment for only four years, what will be the future after four years, no pension, no guarantee of the future, the forces will become inexperienced,” it said.

Clarifying the doubts, the video further said, “With this scheme, the dream of youth to join the forces will come true. This will bring in patriotism in the youth. Unemployed youth will get four years of experience. After four years, there will be opportunities for other jobs.

Further, it added that 25 per cent Agniveers will get the opportunity of full time service with the forces. They will get Rs 11.71 lakh Seva Nidhi, which they can utilise to pursue their studies or start their business.

The video claimed that Agnipath scheme was a means of extending services to the country, to guide the youth, to bring changes in a village and to empower the country.

Besides, as the protests against the scheme intensified across the country, government sources came out with a fact sheet, busting all the myths surrounding the scheme.

The fact sheet basically denied that Agniveers will have an insecure future after four years of engagement with the forces. It said that those wishing to be entrepreneurs will get a financial package and bank loan scheme as well.