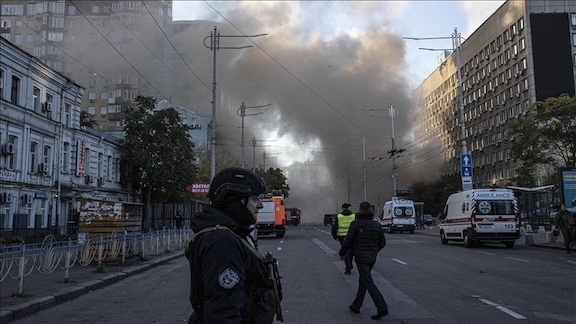 Moscow: The foreign ministers of France, the United Kingdom, and the United States, rejected on Monday Russia’s claims that Ukraine was going to detonate a “dirty bomb” on its own territory to blame Moscow for the use of weapons of mass destruction during its special military operation and, thus, tarnish the image of the country.

On Sunday, Russian Defense Minister Sergei Shoigu expressed concerns to his French, Turkish and UK counterparts that Kiev, according to credible sources in various countries, was preparing a provocation related to the detonation of a dirty bomb. According to the sources, Kiev has already begun the practical implementation of the plan, with the work on the bomb creation being at the final stage.

“Our countries made clear that we all reject Russia’s transparently false allegations that Ukraine is preparing to use a dirty bomb on its own territory. The world would see through any attempt to use this allegation as a pretext for escalation,” the French, UK and US foreign ministers said in a joint statement released by the UK government.

Meanwhile, Ukrainian Defense Minister Oleksii Reznikov invited monitoring missions of the United Nations and the International Atomic Energy Agency to visit the country amid reports about a so-called dirty bomb.

“We demand adherence to paragraph 4 of the Budapest Memorandum,” Reznikov wrote on Twitter.

Kiev signed the Budapest Memorandum on Security Assurances in 1994, giving up the world’s third largest stockpile of nuclear weapons. The UN Security Council, in turn, pledged to provide assistance to Ukraine if the country is under threat of nuclear attack by other states.