Former FexEx employee Brandon Scott Hole, 19, of Indiana has been identified as the suspect who died by suicide before the police arrived. 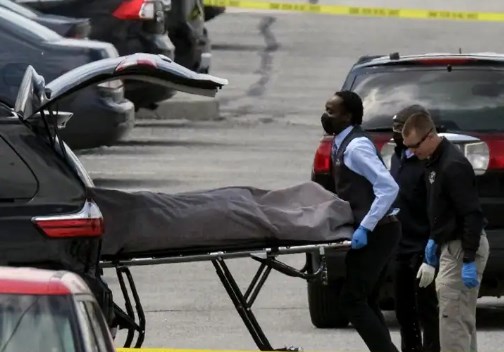 Indianapolis: Three women and one man from the Sikh community were among eight FedEx employees who were killed in a shooting at FedEx parking area, near Indianapolis International Airport on Thursday night.

Former FexEx employee Brandon Scott Hole, 19, of Indiana has been identified as the suspect who died by suicide before the police arrived.

Founder and president of Indiana India Business Council Raju Chinthala expressed deep shock over the incident, including. According to him, the victims have been identified by the Marion County Coroner’s Office and The Indianapolis Metropolitan Police Department (IMPD).

Amarjit Kaur Sekhon, 48, Jaswinder Kaur, 64, Amarjit Kaur Johal, 66, are the three females and Jaswinder Singh, 68, were those members of the Sikh community who were killed in the mass shooting. In all eight employees have been killed and several persons were injured.

SikhPAC chairman Gurinder Singh Khalsa said: “It’s not just heartbreaking for my community, but for all eight victims. Half of the victims are Sikhs. Very sad and tragic day for every American, every Hoosier and particularly for Sikh community.”

In a statement issued by FedEx said: “We are deeply shocked and saddened by the loss of our team members following the tragic shooting at our FedEx Ground facility in Indianapolis. Our most heartfelt sympathies are with all those affected by this senseless act of violence. The safety of our team members is our top priority, and we are fully cooperating with investigating authorities.”

Diego Morales, who is running for the office of Indiana Secretary of State said: “Sidi and I send our thoughts and prayers to the families of the victims affected by the senseless act of violence that occurred at FedEx in Indianapolis. Grateful for our first responders and law enforcement for quickly responding to provide aid.”

Center for Interfaith Cooperation Board Chair Reverend Brian Shivers in a message said, “Our hearts break as yet another act of violence has impacted our community. No matter what faith you practice, we encourage everyone to join our neighbors from around the broader Indianapolis community in supporting the families and loved ones of the victims of this senseless act. We also commit the sound of our voices in prayer for an end to violence and the work of our hands in action to build bridges of unity and possibility.”

Sikh Satsang of Indianapolis offered condolences, deepest sympathies and prayers for the victims and their families. ‘May Waheguru Ji be with us in our hour of need.’

Sikh coalition Executive Director Satjeet Kaur in a statement said: “We are deeply saddened to learn that Sikh community members are among those injured and killed by the gunman in Indianapolis.”

Grandmaster Javed Khan said “prayers for the victims of the senseless killings at the FedEx facility in Indianapolis and their families.”

Mike Hart City-County Councilman at City of Indianapolis wrote: “The shooting that took place at the FedEx ground facility last night is deeply heartbreaking and troubling. My family and I have the victims and their families in our thoughts and prayers, and we will continue to pray for them. Today truly is a tragic day for the city of Indianapolis. Mental illness, when left unchecked, can lead to devastation and is unnecessary.”

Meanwhile a photo of Brandon Scott Hole has appeared in the official news page for reporter Rich Nye of WTHR TV 13 News.

Many leaders, including US President Joe Biden and Vice President Kamala Harris, have expressed condolences over the loss of lives.