Pujan Biswas last week resigned from Youth Congress accusing its central leadership of not extending support to expand the party in Tripura for the last two years. 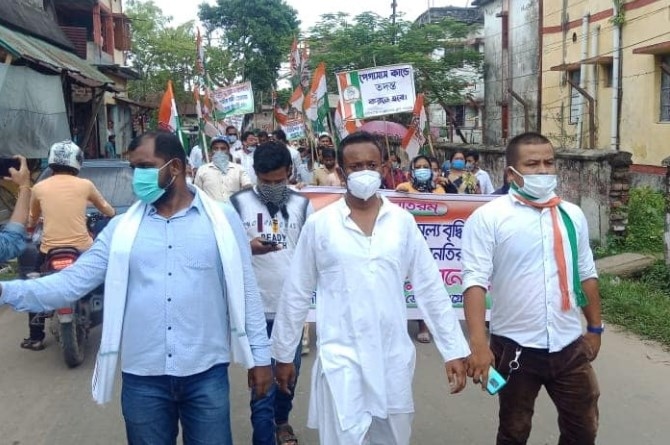 Pujan Biswas last week resigned from Youth Congress accusing its central leadership of not extending support to expand the party in Tripura for the last two years. A day before his father Pijush Kanti Biswas who had been the chief of the Pradesh Congress committee resigned from the post and party citing personal reasons.

Later, a few others including veteran leader Tapas De resigned from Congress accusing all India Congress leaders of persuading them not to oppose CPI-M. They all including Pijush and Tapas have joined TDF to fight against CPI-M, Congress and BJP.

According to report, TIPRA, being the tribal dominated party, has desperately been looking for a non-tribal partner, which will be working for Pradyot’s team in plains. Pujan Biswas, has become the front runner to grab the opportunity and told media today that all the so called national parties and communist have not been interested in the development of local people and regional parties are the only alternative.

“We have seen the rule of CPI-M and BJP in the state and Congress from the inside. None of the party is interested in the development of Tripura but everyone wants to use the state as their area of occupation forgetting the commitments towards the people. We are convinced that the local party role is the only option for Tripura today, otherwise, the future of the state is dark,” Pujan said.

He pointed out that national parties especially, Congress and BJP forged alliance with the local parties just to grab power while CPI-M wanted to pursue their obsolete theory of Marxism in 21st century. But all the parties have forgotten the promises of development, instead they used the sentiment of the people for their vote bank politics.

“TDF will fight tooth and nail for the cause of development of the land and people of Tripura along with other local parties. We shall not go for any poll understanding with any of the national parties unless our objectives are fulfilled, rather national parties can come to us for their survival – what Maharaj Pradyot Kishore indicated earlier on a number of occasions,” he added.

Nailing BJP led government in Tripura Biswas pointed out that the indigenous people of the state have continued to be neglected under Biplab Kumar Deb government. This government has opened up multiple opportunities for the outsiders to enjoy the resources, get all contracts and even get into the job of Group C and D categories, which has not happened in any other state of northeast.