The state had earlier declared three days of state mourning from. Thursday with the Tricolour flying at half mast. 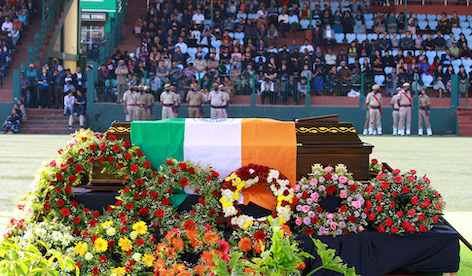 Shillong: The mortal remains of former Chief Minister Jing Dringwell Rymbai, who passed away here on Thursday due to old age, was laid to rest here at the Presbyterian Church cemetery with full state honours on Saturday afternoon. Rymbai was given a 21-gun salute.

The state had earlier declared three days of state mourning from. Thursday with the Tricolour flying at half mast.

Paying his tributes, Tynsong recalled the services of the late leader and various positions he had held while serving the state as elected representative.

He said Rymbai, who hailed from a humble background, had worked hard to rise to prominence by being elected as legislator, besides holding the post of Deputy Speaker, Speaker, Cabinet Minister and later as Chief Minister of Meghalaya.

The Speaker, Metbah Lyngdoh and Jirang legislator, Sostheness Sohtun also spoke and paid their tributes to the late veteran leader. Rymbai was sworn in as Chief Minister on June 15, 2006 and he held the post for eight months till March 10, 2007. He replaced his loyalist Donwa Dethwelson Lapang.

However, Rymbai was ousted of power after few of his loyalists backstabbed him in support of Lapang who again returned as Chief Minister. Rymbai was elected to the 60-member Meghalaya Legislative Assembly where he represented Jirang Assembly constituency from 1988 to 2013.

After leaving the Congress, he successfully contested on United Democratic Party (UDP) ticket in the 2008 Assembly elections. The soft-spoken educationist, joined active politics in 1983 after teaching in a government school.

He lost his first election in 1983 from Jirang constituency. Known as ”Mr Clean,” he quit active politics in January 18, 2013 prior to the Assembly elections in 2013.