The 15-time Major champion, Woods was hoping to play his first competitive round since the 150th Open at St. Andrews at his own event, the Hero World Challenge. 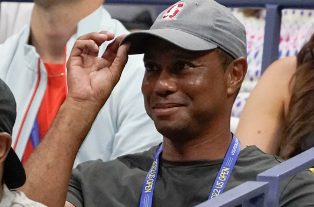 Albany (New York): Tiger Woods’ much awaited return to competition will have to wait a little longer as he was forced to pull out of Herp World Challenge due to foot injury.

The 15-time Major champion, Woods was hoping to play his first competitive round since the 150th Open at St. Andrews at his own event, the Hero World Challenge.

Woods, who co-founded the HWC, has rarely missed the event, which is being sponsored by World’s No. 1 two-wheeler company, Hero MotoCorp, for the eighth year in a row.

Addressing a press conference ahead of the Hero World Challenge here, Woods said, “Well, it was a tough decision just because I want to play. I like playing, I like competing, but unfortunately, I can hit the golf ball and hit whatever shot you want, I just can’t walk.

“And so I’ve had a few setbacks during the year that I still was able to somehow play through, but this one I just can’t. I just — only time can heal this one and stay off my feet and get a lot of treatment done.”

“Well, as I was ramping up and had to walk more, the worse it got. So when you get plantar fasciitis, that’s the worst thing you can do is walk, and I was walking more and more and more, trying to get my legs ready for this event, and I just kept making it worse. So had to shut it down and unfortunately, be the host of the event,” he added.

The 46-year-old, who was battling through injuries, and recovering from his February 2021 car accident, missed the whole of pandemic-hit 2021 and then made just three starts in 2022.

He made the cut at the Masters; withdrew after being unable to bear pain following three rounds at the PGA Championships and then missed the cut at the Open in Scotland.

Earlier, in a statement, released through his social media handle, Woods, said, “In preparation and practice for this week’s Hero World Challenge, I’ve developed plantar fasciitis in my right foot, which is making it difficult to walk.”

“After consulting with my doctors and trainers, I have decided to withdraw this week and focus on my hosting duties.

“My plan is still to compete in The Match and PNC Championships.”

He was then due to play “The Match” (December 10) with Rory McIlroy against Justin Thomas and Jordan Spieth; and finally the 36-hole scramble event, PNC Championship (December 17-18) with his son, Charlie.

With Woods not having played since July 2022, his world ranking had plummeted to 1277. His replacement by Straka, World No. 29, will ironically strengthen in the field in terms of World Rankings points available this week.

The 20-man field event this week includes 15 of the World’s current Top-18 ranked players and 18 of the 23 plus Straka (No. 29) and Kevin Kisner (No. 31). The event includes three of this year’s four men’s major winners and seven players who have won at least one Major.

Woods is a five-time winner and a five-time runner-up, in the event, which began in 1999. The event has been sponsored by Hero MotoCorp since 2014 and it found its new home in the Bahamas in 2015.