This way, he will be inspiring those who still prefer to remain indoors and don’t come forward to cast their votes. 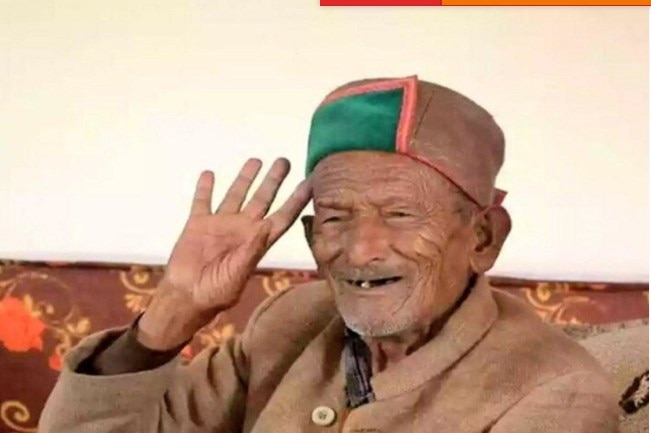 Hamirpur/Mandi (HP): India’s first voter, Shyam Sharan Negi, who has turned 105, is still keen to once again vote in the coming bye-election for the Mandi Lok Sabha seat from Kinnaur slated for October 30th.

This way, he will be inspiring those who still prefer to remain indoors and don’t come forward to cast their votes.

Deputy Commissioner, Kinnaur, Abid Hussain who met Negi at his house in Kinnaur said that Mr, Negi was ready to cast his vote. Mr Hussain inquired about his well being and wished him a long life

Born on July 1, 1917 in Kalpa, Kinnaur, Shyam Sharan Negi was serving as a teacher when he exercised his franchise for the first time. During that time his duty was imposed in the elections. After the independence of India, the first general election was going to be held in February-March 1952, but in view of the possibility of snowfall in Kinnaur, voting was done 6 months before.

During that polling, Master Shyam Sharan Negi reached the Kalpa booth in the morning and cast his vote ahead of all other voters and thereby became the first Indian to cast his vote in Independent India.

That is the reason that Mr Negi is known as the first voter of India.

Congress delegation on way to Mon stopped at Jorhat Airport

‘We are real Congress’: Trinamool