The goalkeeper saved from Virgil van Dijk and Steven Berghuis, leaving Lautaro Martinez to blast home Argentina's fifth penalty and send the Albiceleste into the last four on Friday. 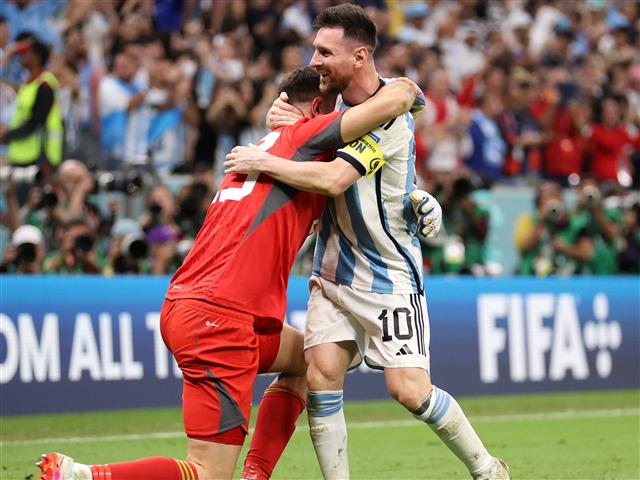 Lusail: Emiliano Martinez came to Argentina’s rescue as his side overcame the shock of losing a two-goal lead to go on and defeat the Netherlands on penalties and reach the semifinals of the FIFA World Cup Qatar.

The goalkeeper saved from Virgil van Dijk and Steven Berghuis, leaving Lautaro Martinez to blast home Argentina’s fifth penalty and send the Albiceleste into the last four on Friday.

Argentina looked in total control after a first-half strike from Nahuel Molina and a penalty from Lionel Messi, his 10th goal at a World Cup, had given them a two-goal cushion in the second half.

But the Netherlands finally came to life with ﻿some direct substitutions from coach Louis van Gaal, who withdrew Memphis Depay and Steven Bergwijn and threw on target men Wout Weghorst and Luuk de Jong.

Weghorst made things interesting by heading home a cross from another substitute Steven Berghuis, who then had the chance to level from inside the area but fired just wide of the near post.

Argentina thought they had weathered the storm, but then conceded a free-kick in a dangerous position and Weghorst struck again to force the extra period.

Lionel Scaloni’s side showed more desire to try and snatch victory and had a flurry of late chances in extra-time, with Enzo Fernandez hitting the post.

Argentina were expecting ﻿Teun Koopmeiners or Cody Gakpo to go for goal from the free-kick in what looked like the last moment of the game, and even ordered Alex Mac Allister to lie on the floor to prevent a low shot.

But Koopmeiners took everyone by surprise by passing the ball in a straight line to Weghorst, who controlled the ball with his back to goal before swivelling and stabbing it into the net.

From being down and out, the Netherlands had somehow taken the game to extra time. It wasn’t enough for them to go through, but it was yet another thrilling chapter of this wildly unpredictable World Cup.

As in the day’s earlier game between Croatia and Brazil, a penalty shootout was required and Argentina’s charismatic goalkeeper stepped into the limelight.﻿

For the second time in eight years, Argentina are into the semifinals, where they will meet Croatia back at Lusail Stadium on Tuesday.