Jorge Ortiz (20th, 41st, 53rd) scored a hattrick after Makan Chothe (6th) opened the scoring for the Gaurs with Narayan Das (45th OG) putting the ball in his own net, to sum up, Chennaiyin's night. 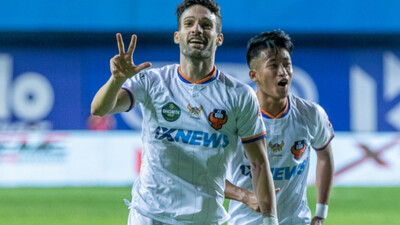 Vasco (Goa): FC Goa kept their slim playoff hopes alive with a five-star performance against Chennaiyin FC whose aspirations of a top-four spot were dealt a heavy blow, as they were humbled 5-0 in the Indian Super League (ISL) at the Tilak Maidan Stadium here on Wednesday.

Jorge Ortiz (20th, 41st, 53rd) scored a hattrick after Makan Chothe (6th) opened the scoring for the Gaurs with Narayan Das (45th OG) putting the ball in his own net, to sum up, Chennaiyin’s night.

Goa snapped a five-game winless run to return to form in the best possible way, moving to 18 points from 16 matches and doing their goal difference a world of good. They remained in ninth spot.

For Chennaiyin, it was their second consecutive loss, meaning the former champions remained on 19 points from 16 matches and placed eighth in the points table. It was all FC Goa from the start as they bossed proceedings from the start to finish, leaving Chennaiyin with little room to breathe.

Chothe logged his first-ever Hero ISL goal after Edu Bedia slipped a pass to Aiban Dohling on the left flank for the young winger to serve a crisp cross at the far end for Chothe to volley the ball first time into the back of the net with aplomb.

Ortiz made it 2-0 soon after, Dohling involved again as he put the ball inside the area after Brandon Fernandes sent him in the clear on the left channel. Chennaiyin defence were left ball watching as they failed to clear the danger and the ball went to Ortiz who took a few touches before slotting home past Debjit Majumder in Chennaiyin goal.

Dohling, for all his industry, could have made it 3-0 for Goa from a Edu Bedia corner but his header was pushed away to safety by Debjit. Chennaiyin failed to get a grip of the game and posed almost no threat in the attacking third as Goa piled on the misery with two more goals before the halftime whistle.

First, Ortiz doubled his tally with the brilliant Dohling starting the attack again as he combined with Alberto Noguera in the middle of the park. Noguera escaped a few Chennaiyin shirts to pass the ball to Ortiz who took a deft touch to evade Anirudh Thapa and fire home. On the stroke of halftime, Noguera floated in a delightful ball inside the box and an under-pressure Narayan Das put it into his own net to cap off his team’s half.

The second half saw more of Goa domination as Chennaiyin failed to muster any real opportunity in front of goal. Ortiz crowned his brilliant performance with a first hattrick this season after the effervescent Dohling got past a few defenders to nudge the ball in the path of the Spaniard whose sublime first touch took the ball away from Narayan as he charged forward to rifle home from close.

Chennaiyin tried hard to weather the Goa storm by bringing in Nerijus Valskis for the ineffective Lukasz Gikiewicz but it was just not their day.