Addressing the press conference at the conclusion of its plenary, President Raja Kumar noted that Pakistan had been on the grey list since 2018. 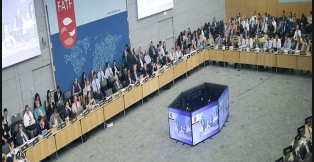 Islamabad: The Financial Action Task Force (FATF) on Friday removed Pakistan from a list of countries under “increased monitoring”, also known as the “grey list”.

Addressing the press conference at the conclusion of its plenary, President Raja Kumar noted that Pakistan had been on the grey list since 2018.

“It has two concurrent action plans. After a lot of work by Pakistan authorities, they have largely addressed all of the action plan items,” he said.

He stated that the task force had conducted an onsite visit at the end of August. The onsite team verified that there is a high level of commitment from the Pakistani leadership, sustainability of reforms, and commitment to make improvements in the future, he said.

“As a result of these action plans, Pakistan has made significant improvements to strengthen the effectiveness of this framework for combatting terrorism financing.”

Foreign Minister Bilawal Bhutto-Zardari was quick to congratulate the country on the development moments before the FATF press conference began, according to Dawn reports.

Prime Minister Shehbaz Sharif said Pakistan’s exiting the FATF grey list is a “vindication of our determined and sustained efforts over the years”, according to reports.

He congratulated the civil and military leadership as well as all institutions whose hard work led to today’s success. “Aap sab ko bohat bohat Mubarak,” the premier said, following up with a text smiley.

In a follow-up tweet, PM Shehbaz particularly commended the role and efforts of Foreign Minister Bilawal Bhutto, Army Chief General Qamar Javed Bajwa and their teams, and all political parties for putting up a united front to get Pakistan out of the grey list.

Pakistan was included among jurisdictions under an increased monitoring list in June 2018 for deficiencies in its legal, financial, regulatory, investigations, prosecution, judicial and non-government sectors to fight money laundering and combat terror financing considered a serious threat to the global financial system.

Islamabad made high-level political commitments to address these deficiencies under a 27-point action plan. But later the number of action points was enhanced to 34.

The country had since been vigorously working with FATF and its affiliates to strengthen its legal and financial systems against money laundering and terror financing to meet international standards in line with the 40 recommendations of the FATF.

A 15-member joint delegation of the FATF and its Sydney-based regional affiliate — Asia Pacific Group — paid an onsite visit to Pakistan from Aug 29 to Sept 2 to verify the country’s compliance with the 34-point action plan committed with the FATF.

The authorities that had kept the countrywide visit of the delegation low profile later termed it “a smooth and successful visit”.

The delegation had detailed discussions with relevant agencies pursuant to the authorization of onsite Visit by the FATF Plenary in June 2022.

According to the Foreign Office, the focus of the visit was to validate on the ground Pakistan’s high-level commitment and sustainability of reforms in the AML/CFT regime, and [it] looked forward to a logical conclusion to the evaluation process.

Pakistan believed that as a result of strenuous and consistent efforts over the past four years, it has not only achieved a high degree of technical compliance with FATF standards but also ensured a high level of effectiveness through the implementation of two comprehensive FATF action plans.

In June this year, FATF had found Pakistan “compliant or largely compliant” on all 34 points and had decided to field an onsite mission to verify it on the ground before formally announcing the country’s exit from the grey list that finally took place in August and September.

In terms of technical compliance with FATF standards, Pakistan has been rated by APG as “compliant or largely compliant” in 38 out of 40 FATF recommendations in August this year, which placed the country among the top compliant countries in the world.