Ukrainian airfields, command posts, naval bases and radar stations were among the facilities destroyed, according to the Russian Defence Ministry. 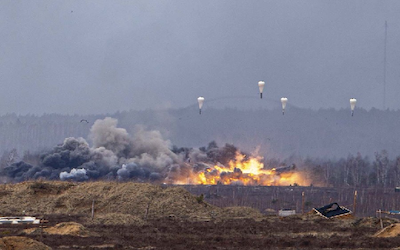 There was no air raid alert around the time of the blasts, which the local authorities have not yet confirmed, according to Interfax-Ukraine news agency.

Interior Ministry adviser Anton Gerashchenko wrote in a telegram that he had just heard two powerful explosions, which he later clarified as “attacks by our air defences on enemy planes or drones,” citing operative information.

Mayor Vitali Klitschko tweeted that three people were injured, one in critical condition, after missile debris hit a residential building. He also posted a photo showing a building with part of its wall torn down and emergency services present at the scene.

On Thursday, Russian President Vladimir Putin authorized “a special military operation” in Donbass, and Ukraine confirmed that military installations across the country were under attack.

Ukrainian airfields, command posts, naval bases and radar stations were among the facilities destroyed, according to the Russian Defence Ministry.