Elephant dies due to electrocution in Kaziranga National Park in Assam

Minister for Environment and Forest, Parimal Suklabaidya reached the site of the incident and instructed officials to avert such incidents in future. 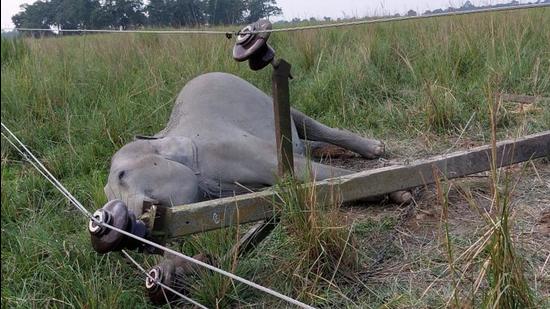 Guwahati: A 15-year-old male elephant was electrocuted at Malini division of Burhapahar tea estate under Kaziranga National Park and Tiger Reserve on Friday.

The elephant which was passing through the tea garden was electrocuted when its body touched a transformer leading to its death. Post mortem is being conducted by a team of veterinarians.

Minister for Environment and Forest, Parimal Suklabaidya reached the site of the incident and instructed officials to avert such incidents in future.

Forest officials will also investigate the matter in order to check for any sort of foul-play as several jumbos in Assam die due to illegal electric fences and lines usually set by locals.

Usually, these lines are set to prevent the elephants from entering their fields of farmers. Most of the incidents of elephant electrocutions occur near farmlands where electric lines are set by locals for preventing wild animals’ entry.