Within 24 hours of the resignation of Uddhav Thackeray, Shinde and Fadnavis took oath in a low-key function held at the Durbar Hall of the Raj Bhavan here. 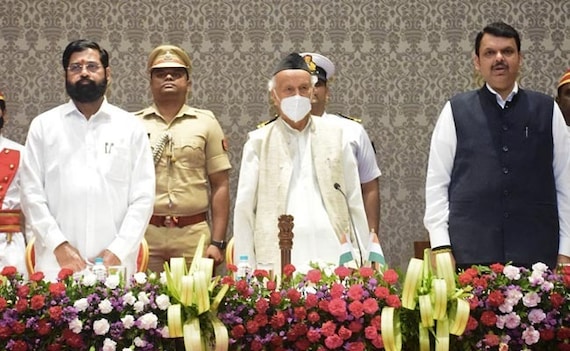 Mumbai: The political turmoil, which has been going on for the last 10 days, finally came to an end on Thursday evening, as former Shiv Sena leader Eknath Shinde took oath as 20th Chief Minister Maharashtra, while Devendra Fadnavis was sworn-in as the Deputy Chief Minister.

Within 24 hours of the resignation of Uddhav Thackeray, Shinde and Fadnavis took oath in a low-key function held at the Durbar Hall of the Raj Bhavan here.

Governor Bhagat Singh Koshyari administered the oath to both Shinde and Fadnavis in Marathi.

“With the blessings of Hindu Heart Emperor Balasaheb Thackeray and Dharmaveer Anand Dighe, I am taking the oath of Chief Minister of Maharashtra,” said Shinde, during his oath-taking ceremony.

Eknath Shinde’s family also attended the swearing-in ceremony. The former Shiv Sena leader, who was instrumental in the fall of Maha Vikas Aghadi government in the state, was provided with ‘Z’ security, due to a wave of anger among the Uddhav Thackeray loyalists over his rebellion.

Prime Minister Narendra Modi congratulated both the Chief Minister and his Deputy on Twitter.

“I would like to congratulate Shri@mieknathshindeJi on taking oath as Maharashtra CM. A grassroots level leader, he brings with him rich political, legislative and administrative experience. I am confident that he will work towards taking Maharashtra to greater heights,” he tweeted.

“Congratulations to Shri @Dev_Fadnavis Ji on taking oath as Maharashtra Deputy CM. He is an inspiration for every BJP Karyakarta. His experience and expertise will be an asset for the Government. I am certain he will further strengthen Maharashtra’s growth trajectory,” he said in another tweet.

BJP national president JP Nadda, in a series of tweets in Hindi, said “I congratulate Eknath Shinde and Devendra Fadnavis. This has been proven now that BJP was never hungry for the Chief Minister’s post. In 2019 elections, (Prime Minister) Narendra Modiji and Devendraji got a clear mandate. However, Uddhav Thackeray, in the greed of Chief Ministership, left us and formed the government with the opposition.

NCP president Sharad Pawar, who was an ally of the previous Maha Vikas Aghadi government, congratulated Shinde on Twitter in Marathi.