Host India on debut suffered 0-8 loss in the opener in Group A. Virtually in one-way traffic the visiting side was the dominant figure and they hurled their first goal in the 9th minute when frontline Melina Rebimbas volleyed past helpless goalkeeper Anjali Munda. 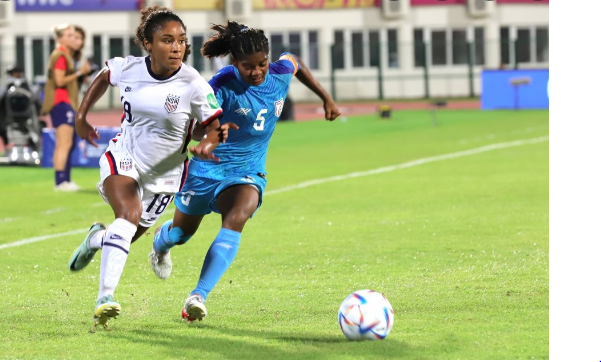 Bhubaneswar: After going down to the USA (8-0) in their debut play in the FIFA U-17 Women’s World Cup, India’s head coach Thomas Dennerby admitted that early mistakes in the game cost them, dear.

“I believe the girls were a bit too nervous in front of the opponents. It was their first World Cup game – they couldn’t handle the pressure. It’s very hard to control emotions at this level and against such rivals” the 63-year-old Swedish football strategist opined in the post-match conference.

“We played the best team so far and it was really tough for us. We weren’t confident enough to pass the ball or build up and they did some early mistakes into the game which really impacted our performance”, Dennerby added.

India went down 0-8 in their first match of the U-17 Women’s World Cup and captain Astam Oraon admitted what went wrong against the USA and said, “Yes, we know we weren’t good enough in front of them, their speed, high pressing tactics – everything was so strong.”

“We have learned a lot from the game and will work on our areas where we are weaker to give a better performance in our next game”, she added.

When the coach was asked about how he will motivate the players after the loss, he mentioned, “The face of the coach is also the face of the player. So I will be smiling and supporting them the best way I can.I spoke to the girls in the locker room and said –‘Girls, the sun will come out anyway and we will have a new morning’. We have to accept the loss and come back even stronger.”

Host India on debut suffered 0-8 loss in the opener in Group A. Virtually in one-way traffic the visiting side was the dominant figure and they hurled their first goal in the 9th minute when frontline Melina Rebimbas volleyed past helpless goalkeeper Anjali Munda.

Then the goal galore began as Charlotte Ruth Kohler buttressed the tally for USA in the 15th minute, followed by Onyeka Paloma Gamero adding another in the 23rd minute. She was followed by Melina

India will face Morocco on Friday and the USA will play against mighty Brazil.