TSECL had reminded the state government not to accept the target of most ambitious schemes of central government until the transmission, distribution and other infrastructure issues were not addressed but it was not heard. 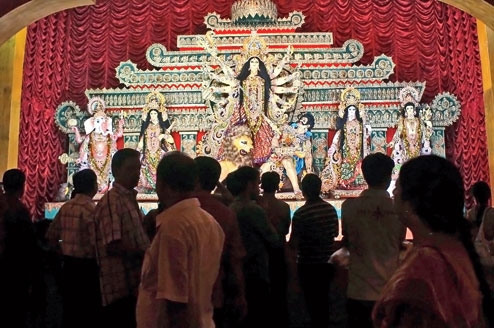 Agartala: The celebration of Durga Puja was marred in a large part of Tripura yesterday following a major breakdown in the system.

The power supply has been continuously disrupting from the first day of Durga Puja on October 11 last across the state, even the crowded puja pandals of the city remained in dark due to frequent power cuts.

Tripura State Electricity Corporation Ltd (TSECL) sources blamed the government for the situation and claimed that without improving the transmission and distribution systems, the state government had compelled TSECL to extend the power supply to the distant villages under central government schemes, which affected the supply network.

TSECL had reminded the state government not to accept the target of most ambitious schemes of central government until the transmission, distribution and other infrastructure issues were not addressed but it was not heard. As a result, over two lakh new connections have been provided in the last three years without investing adequate attention to infrastructure development.

“Tripura which was one of the few power surplus states for five years has now been experiencing frequent power cuts even for a day. Yesterday, the entire South Tripura and Gomati district were completely in darkness and in the evening when electricity load increased, the whole state including Agartala has faced repeated power cuts during Durga puja when big crowds were on the street at night,” said a senior official of TSECL.

He stated that a sudden fire accident in a substation under Gomati district early morning yesterday due to heavy storm and rain has completely damaged a 5 MVA 33/11 KV transformer and a 132/33 25 MVA transformer was isolated while at least five cable lines and six more distribution transformers were damaged that affected power supply in two districts till late evening.

The devotees in puja pandals and in Tripureswari temple, one of the 51 Shakti Peethas have offered puja and prayer under candle lights in the evening. The peak hour demand of power has been increased to 330 MW due to Durga puja due to large-scale illumination of puja pandals and increase of power consumption due to extremely hot and humid weather for the last three days that the existing system failed to bear, the official argued.

The power situation in semi-urban and rural areas has collapsed due to poor transmission infrastructure despite having an adequate arrangement of power supply from own sources, central share and complimentary dispatches from neighbouring Meghalaya and Mizoram like previous years for Durga puja celebration, they added.