Pointing out the importance of individual interest in a particular line, Nicky encouraged KVGOA to contribute towards building up the unemployed youth to become independent people in their respective interested fields to avoid the employment issue in society. 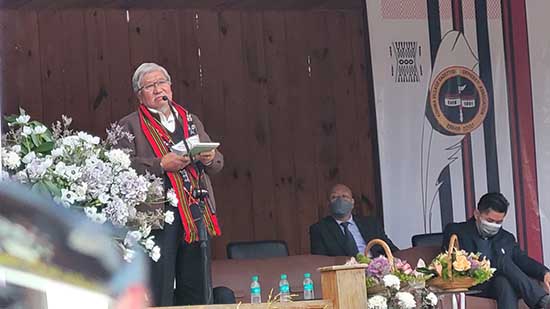 Exhorting the gathering, Advisor for Urban Development and Municipal Affairs Dr. Neikiesalie Nicky Kire called upon the members to meet often to have more understanding and coordination in executing any activities for the benefit of the younger generation and community as well.

Pointing out the importance of individual interest in a particular line, Nicky encouraged KVGOA to contribute towards building up the unemployed youth to become independent people in their respective interested fields to avoid the employment issue in society. He also stated that one of the highest earners today were sportspeople and called upon the association to assist and guide the upcoming generation in such discipline as well.

Nicky also raised concern over the implementation of one way traffic rule in the village and suggested looking into the matter in consultation with the Kohima Village Council.

Secretary Finance & PWD, Kesonyü Yhome, IAS in his speech enlightened the gathering on the status of the Nagaland State finance position. He said that Nagaland society is a salaried economy where money is circulating within the society in the absence of industry to generate any revenue.

Kesonyü stated that Nagaland State has more than one lakh twenty thousand employees which stands the highest ratio as per the population in the country and added that job avenue in the government sector has reached a saturation point. He, therefore, called upon the association to identify unemployed youth from all Khels and guide them in the various sector, especially in the field of plumbing and internal electrification where income source is huge.

He suggested KVGOA plan exposure trips for selected youth within the state as well as in some metro cities to familiarise themselves with the living condition of others. He also stressed the need to set aside some seed money to support the civil service aspirants.

Kesonyü pointed out two main hurdles faced by the district people i.e water supply and traffic problem where he suggested that a committee on the matter may be constituted to coordinate and take up the matters with the concerned departments for the benefit of the citizen.

He suggested the importance of documentation of farming, handloom, and handicraft for the younger generation. Further, he stressed the need to adopt schools and health centers under the jurisdiction and also to revive the concept of Morung during vacations.