Dr Ranjan said that many of us are preferring self-medication which is not recommendable. 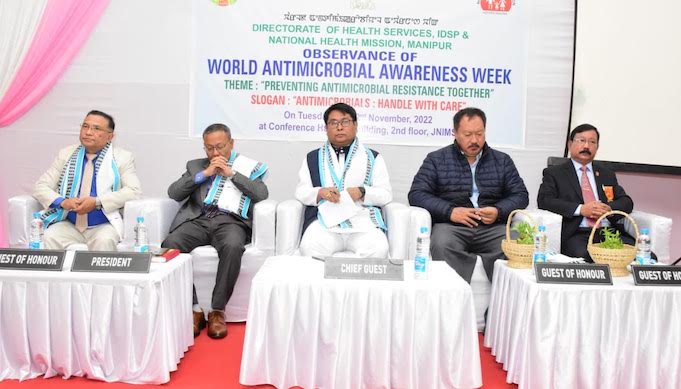 Imphal: Health & IPR Minister Dr. Sapam Ranjan Singh has said that taking antibiotics without the prescription of a medical practitioner may give a negative health impact.

The Minister was speaking as the chief guest on the occasion of the observance of World Antimicrobial Awareness Week held at JNIMS Hospital Lecturer Hall Tuesday.

Dr Ranjan said that many of us are preferring self-medication which is not recommendable. He informed that organizing such observance will help to create awareness amongst the public. We should consult a doctor for any health problem in order to avoid health difficulties later.

He also maintained that there are so many health activities and programs in a year. He should keep in mind that such observance becomes fruitful by sharing awareness in this regard. Mere observation will have no positive impact, he added.

The Minister also stated that a database system for medical professionals and stakeholders needs to be maintained. The Health Department is working in this regard. Doctors, nurses and clinical staff may also take the role of propagating awareness while going for field visits, he suggested.

The occasion was jointly organized by the Health Services Manipur and National Health Mission Manipur.