DMK leads in majority of the seats, poised to return to power after 10 years

The ruling AIADMK, which has been aiming for a hat-trick of wins after it bucked the trend and won the polls in 2016, is leading in 81 seats and the front headed by it was ahead in a total of 92 seats. 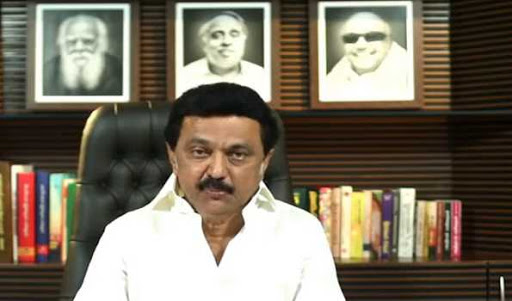 Chennai: Having crossed the simple majority mark, by establishing leads in 120 of the 234 Assembly seats on its own and the alliance led by it leading in 141 seats, the main Opposition DMK in Tamil Nadu is poised to return to power after a ten-year hiatus.
The ruling AIADMK, which has been aiming for a hat-trick of wins after it bucked the trend and won the polls in 2016, is leading in 81 seats and the front headed by it was ahead in a total of 92 seats.
Actor-politician Kamal Haasan of the nascent Makkal Needhi Maiyam (MNM) is leading in Coimbatore South, while it was trailing at third or fourth places in a majority of seats.
Single-phase polling was held on April six for 234 seats to elect the 16th Tamil Nadu Assembly, besides bypoll to the Kanyakumari Lok Sabha seat.
In the bypoll to Kanyakumari seat–caused by the death of Congress MP H Vasanthakumar due to corona, his son Vijay Vasanth was leading by a good margin of over 70,000 votes against former Union
Minister Pon Radhakrishnan of BJP.
In the Assembly polls, the DMK, right from the beginning, got a clear edge over the AIADMK as it crossed the magic mark of 118 on its own to form the next government after a gap of ten years, with its allies too faring well.
Reacting to the results, DMK President M K Stalin said the counting trends indicated that the party was leading in a majority of the constituencies confirming that the DMK is going to form the next government in Tamil Nadu.
In a statement here, he said the a new era is going to begin in the annals of the DMK and appealed to the party cadres to avoid celebrations and bursting of crackers, citing the covid pandemic, and protect themselves and the Nation.
Of the trends available for all the 234 seats, the DMK-led alliance was leading in 141 seats–DMK (120), Congress (14), VCK (3), CPI and CPI(M) two each.
The AIADMK-led combine was leading in 92 seats–AIADMK (81), PMK (6) and BJP (5), while MNM is leading in the other remaining seat.
As of now the trends indicate the repeat of the 2016 numbers with the DMK and the AIADMK swapping places. In 2016, the AIADMK won 136 seats and the DMK-led alliance 98.
All top leaders including Tamil Nadu Chief Minister Edappadi K Palaniswami (Edappadi), Deputy Chief Minister O Panneerselvam (Bodinayakanur), DMK President M K Stalin (Kolathur), his son and DMK Youth Wing leader Udhayanidhi (Chepauk-Tiruvallikeni), BJP State President L Murugan (Dharapuram-R), Ministers, Kamal Haasan (Coimbatore South) and senior DMK leaders and former Ministers are leading in their respective constituencies.
The DMK is also all set to storm the capital city of Chennai leading in all 16 constituencies, with Mr Stalin leading the party’s charge at Kolathur–from where he is seeking a third win–having gained a lead of more than 10,000 votes against his AIADMK rival Adhi Rajaram.
The DMK was leading in 15 seats in Chennai and the lone Congress candidate Haasan Maulana was leading at Velachery against the AIADMK candidate.
Udhayanidhi Stalin was leading at Chepauk-Tiruvallikeni, while the high profile contest at Thousand Lights saw DMK’s Dr.Ezhilan establishing a big lead of more than 10,000 votes over actor and BJP candidate Khushbu Sundar.