During the meeting, Khaipao Haokip stated that the meeting was called to deliberate on the formulation of proposals under the PMJVK Scheme for the district. 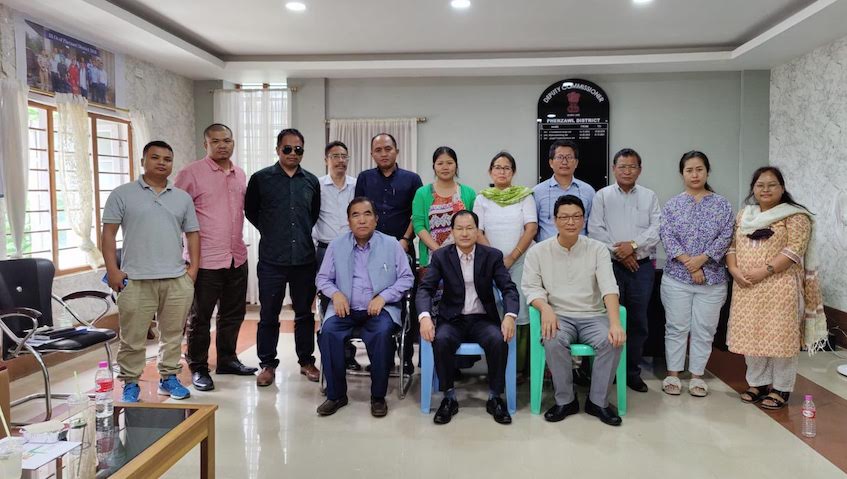 Pherzawl: A DLC meeting in connection with the implementation of PMJVK Scheme in Pherzawl District chaired by the Caretaker ADC Chairman, Khaipao Haokip in presence of MLA 55-Tipaimukh, Ngursanglur Sanate; representative of MP LS (Outer) and DLOs was held Thursday in the Office Chamber of the Pherzawl Deputy Commissioner, Old DC Complex, Churachandpur.

MLA Ngursanglur Sanate, stressed that the primary focus area should be on Education, Health, Skill Development Centre, Community Assets viz Development of existing Playgrounds, Market Sheds, etc. He also opined on the need for a Skill Development Training Centre and implementation of projects at the District level.

Deputy Commissioner, Pherzawl, Joseph Pauline Kamson, emphasized the need on focusing on the areas which need maximum intervention and to avoid duplication with any other ongoing projects either funded by the State Government or by the concerned Ministry. Meanwhile, ADC Pherzawl, Ch Sachi, briefly shared the ongoing Projects under MOMA/MOBEDS in the district along with the admissible Projects under Health, Education, Skill Development, Sports, Drinking water/Sanitation, Solar and Women Centric Projects.

It may be noted that the District Administration, Pherzawl in its continuing commitment to serve the people of the district, SDO Tipaimukh & Vangai Range Irengbam Dineshkumar, started delivering immediate flood relief materials in the district displaced by the recent floods since the last two days. Floods affected 4-5 villages in parts of Tipaimukh Sub-Division and Vangai Range.