Didi’s govt will go on May 2: Modi

Modi said, “Didi's Khela is understood by Bengal people. Didi knows if she goes from here, she will never come back. Didi clean-bowled, BJP has scored century in Bengal's 4 phases.” 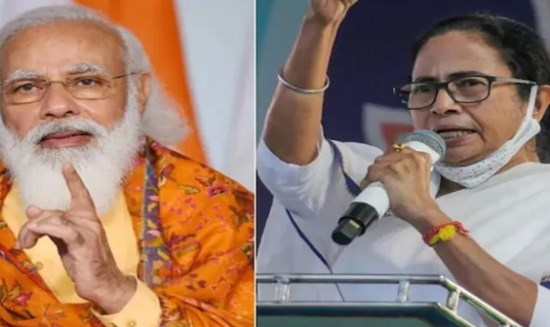 Addressing a public meeting here, Modi said, “Didi’s Khela is understood by Bengal people. Didi knows if she goes from here, she will never come back. Didi clean-bowled, BJP has scored century in Bengal’s 4 phases.”

He said in the 10 years of Didi’s rule, the pain of people was not discussed as it should have been. Bengal wants development. It wants the BJP government. Didi has ruled Bengal for 10 years.

The Prime Minister said, “Didi has not understood your pain. BJP will provide pure water to people of Bengal: We have sent money to Bengal government for this but it has not been fully utilised.”

“Didi has said that whosoever vote for BJP will be thrown out. Is this language acceptable? If you want to express anger, do it at me,” the PM said.

Modi said April 14 is Babasaheb Ambedkar’s Jayanti. And Didi has insulted him.

“Didi’s people abuse Bengal’s SC community and call them beggars. Baba Sahab’s soul would be hurt by hearing such bitter words,” he said.

“Didi has committed sin by insulting Dalits, SCs. Didi o didi, if you want to unload your anger, I am here. Abuse me all you want. But don’t insult Bengal’s dignity and tradition. Bengal won’t tolerate your arrogance, tolabaaz, cut money syndicate because people want ‘asol poribartan’ now,” the PM said.

“Didi calls herself ‘Royal Bengal Tiger’. Such comments on SCs cannot be given by any TMC leader without Didi’s will,” Mr Modi said.

“In Ishwar Chand Vidaysagar’s Bengal, Didi you have insulted Dalits. No body will forget this,” the Prime Minister said.

“Due to Dr Shyama Prasad Mukherjee and Baba Ambedkar, India got Jal Vidyut policy. Bardham is called “Dhan ka Katora’. But here people are living in misery. There is no storage provision and no right price for produce. Only Didi’s syndicate is earning,” Mr Modi alleged.

“In Cooch Behar, people who died were also sons. But Didi’s policies has snatched many sons from mothers: That brave police officer, who had come to Bengal on duty two days ago, was beaten to death. When his mother saw his body, she also succumbed. Didi, is that officer’s mother not a mother for you? No mother in Bengal knew how harsh and ruthless you are,” Mr Modi said.

“Two things are very popular-rice and mihi dana. In Bardhaman, everything is sweet. Then tell me why Didi doesn’t like Mihi Dana. Didi’s bitterness, her anger is increasing every day because in half of West Bengal’s polls, TMC is wiped out. In four phases, Bengal’s population has thrown sixes,” Mr Modi said.

“I extend my wishes to all of you for Navratris, which is starting from tomorrow,” he added.