Desperate scenes at Kabul airport; three fall to death while clinging on to moving US Air Force plane

A video later showed three people falling to their deaths as the plane took to the skies. 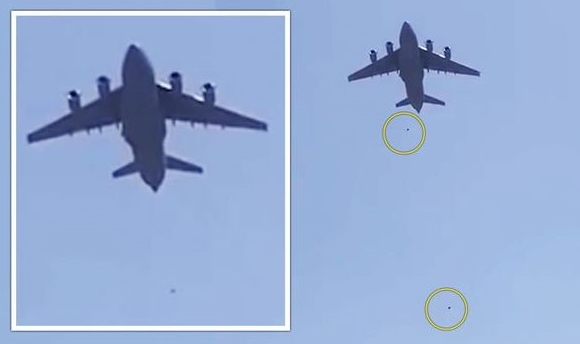 Kabul: Scenes of desperation were witnessed at Kabul airport on Monday as hundreds of people desperate to leave Afghanistan clung on to a moving US Air Force C-17 aircraft on the tarmac.

A video later showed three people falling to their deaths as the plane took to the skies.

Videos uploaded on social media showed hundreds of Afghan people running along with the C-17 on the tarmac as it began slowly wheeling to take off. Some people were seen clinging on to a small ledge near the landing gear.

Other videos showed the plane in the sky just after it had taken off, and some objects fell to the ground.

Later, pictures emerged on social media of locals collecting the bodies of three men who had fallen off while clinging to the wheels of the plane. The men fell to their deaths near Khairkahana area of Kabul.

Earlier, chaos reigned in Kabul’s Hamid Karzai International Airport after gunshots were fired at the teeming crowds with reports that several people were killed and wounded, a day after the Taliban took over the country and Afghan President Ashraf Ghani left the country.

Tolo News showed videos of hundreds of people running on the tarmac in panic after the shooting. It later also showed purported photos of some people lying dead on the ground at the airport.

“Gunfire heard at Kabul airport. Reportedly shots have been fired at crowds seeking to board aircraft. Eyewitnesses report people killed or wounded in the shooting.”

It quoted witnesses to say that “several people were killed and wounded in a shooting at a crowded Hamid Karzai International Airport in Kabul”.

Kabul airport has been thronging with massive crowds since Sunday, following the Taliban takeover of the country, with people eager to leave. Videos and photos of people sleeping on the tarmac and crowding around planes were seen on social media.

On Monday, the airport announced it was suspending all commercial flights.

Kabul airport was overwhelmed on Sunday night with over 2,000 people hoping to board commercial flights leaving the country.