The mishap occurred on Sunday evening after a cable of the ropeway reportedly got snapped, resulting in 48 tourists getting stuck midair about 2500 feet above the ground. 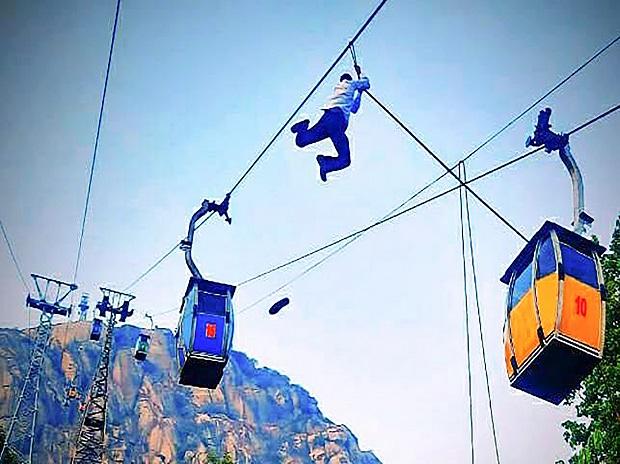 Deoghar (Jharkhand): Two persons including a woman died while 12 others were still trapped after a ropeway accident on the Trikut Hills of Jharkhand’s Deoghar district, officials said on Monday, as rescuers called off their operation for the night due to darkness.

The mishap occurred on Sunday evening after a cable of the ropeway reportedly got snapped, resulting in 48 tourists getting stuck midair about 2500 feet above the ground. At least twelve of them sustained injuries. Thirty-four of the tourists who got trapped have been rescued.

The deceased woman has been identified as Sumanti Devi (50) from Sarath of Deoghar district. An unidentified man died after he fell to the ground just before getting into the chopper.

Expressing grief over the incident, Chief Minister Hemant Soren told reporters at the Ranchi Airport that rescue efforts are being carried out on war footing. He said Army and NDRF rescue teams were trying to bring down everyone safely.

Moreover, the Jharkhand government also took the help of experts and monitored the happenings, while issuing instructions from time to time. Two Indian Air Force helicopters were also pressed into service to bring down the people stuck in the trolleys.

Most of the people stuck in the trolleys were from West Bengal’s Malda, Bihar’s Bhagalpur and Jharkhand’s Deoghar districts. Officials said some of those rescued were airlifted, and some others were made to land vertically. Deoghar Airport Director Sandeep Dhingraearlier said the site’s location was shared with the Air Force helicopters, which then joined the rescue efforts.

The trolleys were hanging nearly 2500 feet above the ground, and therefore the rescue teams adopted all necessary precautions to ensure the safety of the people stuck in the trolleys.

The NDRF teams late in the night on Sunday had also tried sending food packets to the people stuck in the trolleys. Godda MP Nishikant Dubey, Deoghar DC Manjunath Bhajantri and other officials had camped at the spot. State Tourism Minister Hafizul Hasan said the entire incident will be probed and action taken against the guilty.

The Minister said the company running the ropeway will be blacklisted and as an alternative option, a road will also be constructed all the way to the top of the hill.