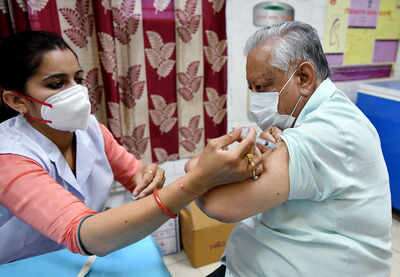 New Delhi: The national capital yet again reported its highest ever fatalities on a single day due to COVID-19. Government data shows 395 Covid patients died in the last 24 hours in Delhi.

The city reported 24,235 Covid cases during the same period. The positivity rate or the chances of infection spreading is 33 per cent, and the active cases are at 97,977, the NDTV reported.

The rising daily fatalities have put intense strain on crematoriums across the city. The Delhi Police has asked the municipal body to find more sites to be used as crematoriums amid.

Some 75 pyres are burnt daily at the Lodhi Road crematorium in central Delhi. “Earlier, we used to cremate 15-20 bodies; now numbers have multiplied, that’s why we issue tokens (for waiting),” said Manish, the caretaker.

Hospitals across Delhi also continue to send sporadic messages on social media for medical oxygen refill. Many patients have died in the past few weeks after oxygen ran out in some hospitals.

The Delhi government has said it is hard pressed on how to carry out vaccination drive for younger people, from 18 to 44 age group, which will start from Saturday as the city “does not have vaccine” enough for them, according to state Health Minister Satyendar Jain. The minister said purchase orders have been placed with vaccine manufacturers.

“At present, we don’t have vaccine. We have requested the companies to provide it,” Mr Jain told reporters. “We will tell you in a day or two,” he said.

Chief Minister Arvind Kejriwal on Monday said those above 18 would get vaccines for free in Delhi.

The surge in Covid cases in recent weeks have led to what is now being called a deadlier second wave of the pandemic. Social media is full of stories of desperate people trying to find oxygen or a hospital bed for their friends and family.

More and more people this time are complaining of breathlessness, which needs oxygen support. However, the supply of oxygen has become severely limited due to the sudden jump in demand across cities and towns. Only now the centre is running “Oxygen Express” trains carrying tankers to states worst hit by Covid.