“May his ideals and values continue to guide and shape us all,” the chief minister added. 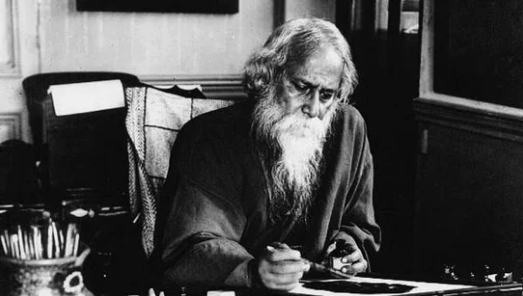 Kolkata: People from all walks of life in West Bengal along with the rest of the country on Monday paid homage to Gurudev Rabindranath Tagore on his 81st death anniversary.

A profile writer whose work ranged from poetries and songs to short stories and plays, Rabindranath Tagore passed away on August 7, 1941, on ‘Baishe Srabon’ (The 22nd Srabon in the Bengali calendar). It has been an age-old custom to celebrate Tagore’s birth and death anniversaries as per the Bengali calendar.

The day- 22nd Srabon- was observed with due solemnity, underscoring Tagore’s genius that is evident in his compositions in music, art, and penmanship.

West Bengal Chief Minister Mamata Banerjee on Monday paid tribute to the poet on the occasion.

Taking to Twitter, Banerjee said, “A poet, social reformer and philosopher, on the death anniversary of Gurudev Rabindranath Tagore, I sincerely pay my heartfelt tribute to him & his proud and enduring legacy.”

“May his ideals and values continue to guide and shape us all,” the chief minister added.

Special prayers were also organized at Shantiniketan, the knowledge town of Tagore’s dreams that blossomed into the Viswa Bharati University in 1921. Cultural activities, lectures, and tree plantation marked the day with teaching, non-teaching staff, and students participating.

Tagore holds the unique distinction of having composed the national anthems of two countries – India and Bangladesh.