Tyagi was seen pushing her and even allegedly threatening her with dire consequences in the purported video. 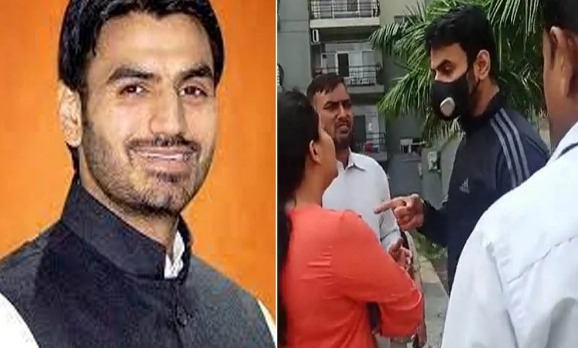 Noida: After demolishing illegal structures erected by Shrikant Tyagi at a Noida society, the Gautam Buddha Nagar Commissionerate on Monday announced a cash reward of Rs 25,000 on the beleaguered self-proclaimed BJP leader even as searches were underway at multiple locations to arrest him.

The Media Cell of the Police Commissionerate said that a reward of Rs 25,000 has been announced on the arrest of accused Shrikant Tyagi in connection with the case lodged at Phase 2 police station.

Official sources said that raids were being carried out at multiple locations, including Lucknow, Meerut, and Muzaffarnagar to arrest Tyagi. “His last location has been traced and the Special Task Force (STF) has been engaged in the operation,” they said.

Earlier in the day, the Noida Administration brought in bulldozers and demolished illegal constructions by Shrikant Tyagi, who has been absconding after he was booked for misbehaving with a woman at a Noida Society.

According to official sources Sharma, who claimed to be a Bharatiya Janata Party leader, had encroached upon the common area in Grand Omaxe Society by making permanent constructions in front of his first-floor apartment.

The illegal constructions have been demolished manually and with the help of bulldozers, they said.

Happy with the UP government and Noida Authority’s action, the women at the society distributed sweets as the illegal construction came down, while men danced around rejoicing the moment.

Sources said that some trees planted by Sharma in the garden area, which he claimed to have purchased, have also been removed. It was this plantation activity that was opposed by the victim of Tyagi’s abuse

On Sunday night a group of Tyagi supporters sneaked inside the Grand Omaxe in an alleged bid to threaten the woman, who had lodged the FIR against Tyagi, but they were caught by the residents.

“When I called the Police Commissioner then only the police reached here. I and our district president are here and I am feeling ashamed to say that it is our government. Ask him (Police Commissioner) how 15 youths entered the society. There could be nothing shameful than this,” he was seen shouting on a phone in a purported video that went viral.

While the residents alleged that instead of detaining the intruders, the police helped them in escaping, the police said that six persons have been detained and further legal action was being taken.

A shocking video of Tyagi abusing a family went viral on Friday. On Saturday the main accused was

booked and his wife and six others were detained.

Tyagi, who claimed to be a BJP Kisan Morcha leader, was booked after the viral video showed the woman complaining that he used bad words for her, her husband, and even her children.

Tyagi was seen pushing her and even allegedly threatening her with dire consequences in the purported video.

The victim had objected to Tyagi planting trees in her housing society.

A separate FIR was lodged against Tyagi for using the logo of the UP government on his vehicle.

“Bulldozer moves in. The Noida administration has demolished the illegal construction erected by Shrikant Tyagi, at Grand Omaxe in Noida’s Sector 93.

“Tyagi was defending the illegal encroachment and was seen abusing and assaulting a woman resident, who had objected to it. Arrest next.”