The election to the Gorkhaland Territorial Administration (GTA) in Darjeeling Hills will be held on June 26 and the results declared on June 29, the State Election Commission announced on Thursday. 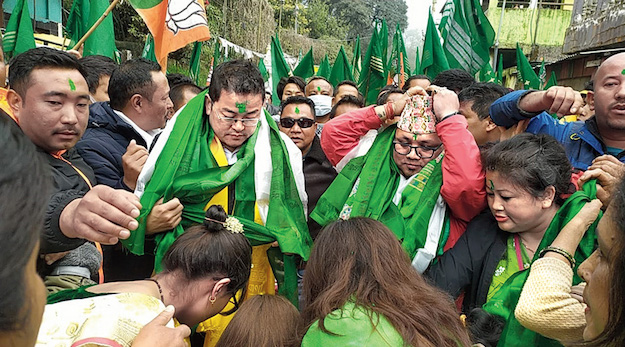 Darjeeling/Kolkata: Amid protests against the holding of the GTA election, the West Bengal government on Friday issued notice for the June 26 poll in Darjeeling’s semi-autonomous region as the filing of nomination for 45-seats began with the issuance of notification, official  sources said.

The filing of nomination ends on June 3 and scrutiny of the nomination papers on the following day and June 6 is the last date of withdrawal of candidature, according to the notification issued by the Hills and Home affairs department.

The election to the Gorkhaland Territorial Administration (GTA) in Darjeeling Hills will be held on June 26 and the results declared on June 29, the State Election Commission announced on Thursday.

Meanwhile, Gorkha Janmukti Morcha (GJM) chief Bimal Gurung, who is on an indefinite fast at his Singmari office in Darjeeling since Wednesday against holding of the GTA poll, was not keeping good health due to fast.

Gurung, whose party GJM was the TMC ally in the last assembly poll, has been opposing the GTA poll unless some of the demands of Darjeeling hills were not conceded.

“I am ready to die to stop the GTA election,” Gurung said before starting his fast at the GJM office at Singamari in Darjeeling.

GJM’s acting president Lopsang Lama told media that its central committee urged Gurung to end his fast due to his health condition.

Besides the GJM, the BJP and its allies and the Gorkha National Liberation Front (GNLF), the second-largest party in the hills, have already opposed the polls along with some of the smaller Gorkha outfits.