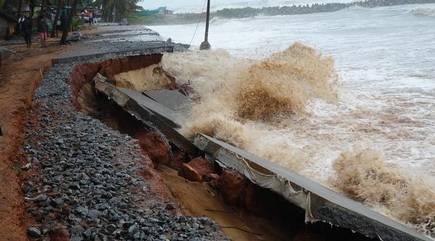 Mangaluru: Tauktae cyclone, developed deep in Arabian sea, has so far claimed 4 lives and made life miserable in more than 73 villages of coastal Karnataka and Malnad districts.

Home Minister Basavaraj Bommai said in Bengaluru that around 1,000 trained personnel from Fire Force, police, coastal police, home guards, SDRF have been deployed in three coastal districts and they will work in coordination.

He also directed the officials to call the Ministers concerned or him directly if in need of any emergency assistance from the government.

The NITK seashore highway between Surathkal Mild Home and NITK Seaside, was badly damaged due to strong waves.

The district administration has taken steps to maneuver households dwelling alongside the fisheries highway in Sasihithlu, Hosabettu, Meenakaliya, Panambur, Ullal and Ullal Someshwar to reduction centres.

Two people died on Sunday in Khanapur taluk of Belagavi District when a wall collapsed on them due to heavy rains.

Police said the deceased have been identified as Doddava Patteda (60) and her grandson Abhishek (3), two injured have been admitted to hospital.