CPM supporters attacked in Tripura after returning from Yechury’s rally 

The party alleged that the miscreants prevented a bus carrying the rally returnees at night on National Highway and carried out the indiscriminate attack on the vehicle. The attackers fled away later following counter-attacks. 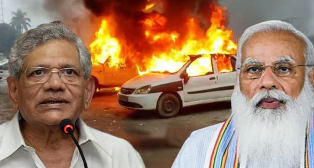 Agartala: At least 10 CPM supporters were injured allegedly in the attack of ruling BJP miscreants on their way back home on Friday night at Santirbazar of South Tripura after attending the party’s rally here.

Three of them were admitted to a local hospital with critical injuries but doctors said they are out of danger.

The party alleged that the miscreants prevented a bus carrying the rally returnees at night on National Highway and carried out the indiscriminate attack on the vehicle. The attackers fled away later following counter-attacks.

“The attack happened in presence of police but, there was no action. When BJP goons left the place leaving the people injured on the road police came to rescue them and shifted them to hospital but didn’t take any action against the perpetrators despite lodging specific details,” alleged CPM MLA of the area Jashbir Tripura.

The CPM alleged BJP goons had issued a warning to the people not to attend the rally and prevented the vehicle owners from renting to CPM and also, didn’t allow the people in several stations to board the train for Agartala on Friday and added, “The miscreants are continuously threatening CPM supporters who attended the rally to face the consequences.”

They further stated that BJP over 55 months didn’t allow oppositions to hold their political activities peacefully but, people have been attending the programs defying threats and intimidations. The ruling party cadres have not also been allowing the opposition MLAs including the leader of the opposition to visit their constituencies and hold political programs.

Terming Friday’s rally as ‘historic’ and ‘reflection of public disgrace towards BJP’, CPM state Secretary Jitendra Chowdhury on Saturday said that the youth who were mobilized by BJP against the opposition supporters have started returning back from the path of violence and BJP now plans
to bring cadres from UP, Maharashtra, and Madhya Pradesh to continue their violence till assembly elections.

“A large number of motorbikes registered with the UP government have been brought to Tripura before Durga puja and now riders are coming from outside well ahead of the election to terrorize the situation, which people of Tripura don’t accept. The people of Tripura were cheated by BJP with tall promises in the 2018 elections and are already got prepared to resist the party in the elections,” Chowdhury observed.

On the other, Tripura Pradesh Congress Committee on Saturday alleged that BJP cadres have ransacked their party office on Friday night at Kalyanpur. They gheraoed the local police station demanding immediate arrest of the culprits.