The "bike-ridden storm-troopers" of the BJP did not spare a single office of any of the opposition parties. 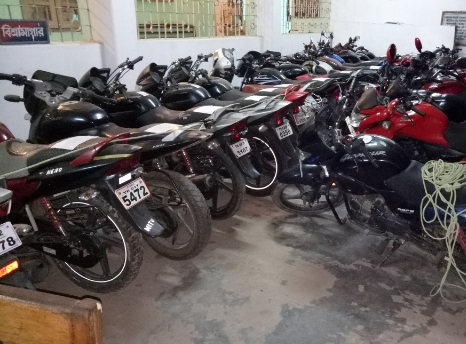 Agartala: CPI-M State Secretary Jitendra Chowdhury on Friday wrote to Tripura Chief Secretary J K Sinha and the Election Commission of India demanding an “impartial inquiry” to ascertain the ownership of a large number of motorcycles registered in Uttar Pradesh that are plying in Agartala.

Chowdhury sought to know who procured hundreds of motorbikes bearing registration numbers of Uttar Pradesh in Tripura and parked them within the premises of the government-run Bhagat Singh Youth Hostel, close to the civil secretariat, for the past one week.

“The government has not yet divulged in whose name the bikes are registered in UP, why the owners allowed those to be transported to Tripura, by whom those bikes were transported here, and by what kind of agreement those were procured and shifted here i.e. by sale deed, donation or on a rental basis,” the letter read.

Chowdhury further alleged in the letter that prior to the last assembly poll in 2018, in the name of electioneering, the BJP “distributed cash and valuables” among their workers, who were also given hundreds of bikes and cars even after the party’s electoral win.

“Those bikes were ruthlessly misused for repression of the opposition supporters and (for) subverting the democratic rights of the common people”, he said, adding that the people of Tripura have witnessed “terrible attacks” perpetrated by the bike-borne “gangsters” of the ruling BJP who carried on “ransacking, looting, destroying and arson” of an innumerable number of houses belonging to the opposition party supporters.

The “bike-ridden storm-troopers” of the BJP did not spare a single office of any of the opposition parties. These were “attacked, ransacked and gutted”, the letter claimed.

“Some of the offices were attacked several times. All the elections held under the BJP regime have been reduced to complete mockery as votes were looted by using the bike-borne terror-mongers in the state,” said Chowdhury.

As the general election to the state Assembly is scheduled in February next year, the people of the state have “reasons to apprehend” that the bikes would be “misused to loot the voting rights” of the people, particularly the opposition party supporters, the letter mentioned seeking immediate action.