Corona curfew relaxed in entire UP, restrictions to continue

Chief Minister Yogi Adityanath declared that the night curfew and weekly curfew will continue in all the districts. 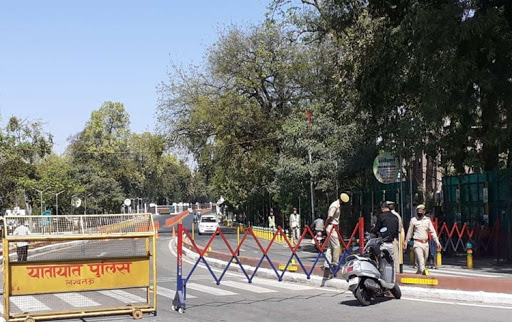 Lucknow: The markets will open in all the 75 districts across Uttar Pradesh from Wednesday from 7 am to 7 pm after three districts, including Lucknow, reported less than 600 active corona cases on Tuesday following which the government announced relaxation in corona curfew.
Chief Minister Yogi Adityanath declared that the night curfew and weekly curfew will continue in all the districts. “This arrangement will continue for a week and a further decision will be taken after reviewing the Corona situation,” he said here on Tuesday.
CM said that corona infection has reduced but it is not over. To prevent spread of corona infection, complete adherence to the corona protocol should be ensured. Extensive patrolling should be done by the police in all the districts. It should be ensured that crowds do not gather anywhere, especially in the markets. Compulsory use of masks by both the buyer and sellers in the markets should be ensured, he said.
“The public address system should be widely used to continuously make the public aware about the prevention of corona infection,” he said.
On Tuesday, 797 fresh Covid 19 cases were reported while 2226 people have recovered. The total active covid cases in the state have now come down to 14067. The casualty on Tuesday due to Covid was 94.
Earlier, curfew was enforced in only 3 districts Lucknow, Meerut and Gorakhpur, which had more than 600 active cases. “As the three districts have reported less than 600 active cases the curfew has been lifted from these districts following which curfew restrictions have been relaxed across the state,” CM said.
The active cases in Lucknow are 592.
As per the government directives all shops, markets and super markets will open from 0700 hrs to 1900 hrs for 5 days from Monday to Friday across the state. There will be 2 days weekly closure of the markets on Saturday and Sunday when sanitization work will be carried out in the districts.
However in containment areas there will be no relaxation at all.
However, schools, colleges, coaching institutes, cinema halls, multiplexes, malls, clubs and swimming pools would remain closed. The government offices will continue to work on 50 per cent strength while private companies can function under Covid protocol and they are asked to promote work from the home system.
The guidelines have allowed opening of restaurants but only for home delivery. Dhabas and restaurants on the highways can open with Covid restrictions. Religious places can open but 5 people at a time will be allowed inside.
The movement of UPSRTC buses has been allowed but has prohibited standing passengers. The transport department has been asked to carry out regular sanitization of the buses.
The government has restricted only 2 passengers on three wheelers and e- rickshaws while only 4 people can travel on a car. Two- wheelers have also been allowed with masks and helmets.
The guidelines has allowed opening of egg, fish and meat shops only in a closed area with full cleanness, while construction work has been allowed with Covid protocols. The government has also fixed the limit of 25 guests in a marriage and 20 people in a funeral.
The Corona curfew was clamped in UP from May 1 and it was extended every week. The government started giving relaxation from June 1 when the number of covid cases started coming down. The bench mark was 600 active cases and those districts which have less than 600 active cases were given relaxation.