The Congress party and its allies also alleged that the BJP used Kuki militants to come out openly and dictate the poll process in the said constituencies. 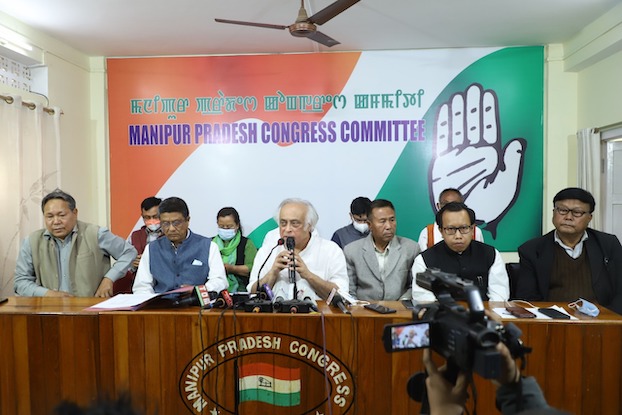 Imphal: The Congress party has rejected the poll process in nine Assembly constituencies held on Monday in Churachandpur and Kangpokpi districts as “bogus” which was completely manipulated by militants.

The Congress party and its allies also alleged that the BJP used Kuki militants to come out openly and dictate the poll process in the said constituencies.

“For the first time the BJP has got a banned outfit to issue a threat to people who were not going to vote for BJP candidate” he said. Multiple representations were given to the CEO Manipur, he said.

He said BJP knew that they would perform badly in the elections and hence a conspiracy was hatched . Manipur Congress, Vice-President Devabrata said the Congress party lodged complaints to the CEO, Manipur about the first phase poll held on Monday.

At Henglep constituency also Congress and its alliance lodged complaints about booth capturing. As for Heingang, a fact finding team should be formed to enquire into the matter as the incident took place at the constituency of the Chief Minister.

Congress candidates were strong in most of the constituencies, he said. In 17 polling stations of Churachandpur, booth capturing, proxy voting were reported. He said the CEO Manipur has not taken up any actions on the complaints lodged by the Congress party.

He further said four Kuki militant groups forced people to vote for BJP as the Home Minister has assured to resolve Kuki militancy problem. He appealed to the ECI to take cognizance of the diktat given by Kuki militants and the inaction of the CEO Manipur on the matter.