"Quint Digital Media, India's only new-age digital media group listed on an Indian stock exchange has, via its wholly owned subsidiary, entered into a binding term sheet with the Adani Group," the company said in a regulatory filing. 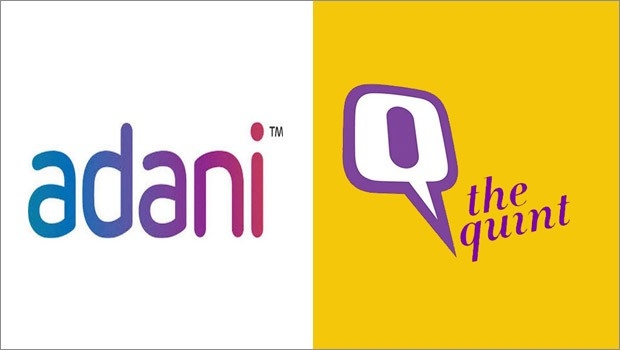 Mumbai: Quint Digital Media on Tuesday said its wholly owned subsidiary has entered into an agreement with the Adani Group to sell a minority stake in Quintillion Business Media, marking billionaire Gautam Adani led firm’s foray into the Indian media.

“Quint Digital Media, India’s only new-age digital media group listed on an Indian stock exchange has, via its wholly owned subsidiary, entered into a binding term sheet with the Adani Group,” the company said in a regulatory filing.

The company, however, did not disclose the size of the deal. Under this agreement, the Adani Group will acquire a minority stake in Quintillion Business Media (QBM), an indirect subsidiary of Quint Digital, it said.

The company said that the proposed transaction with the Adani Group is only for QBM which is a digital business news platform and not in relation to other digital media/media tech properties owned by Quint Digital such as The Quint, Quintype Technologies, thenewsminute and Youthkiawaaz.

“Adani Media Ventures intends to lead the path for new age media across different platforms,” Sanjay Pugalia, CEO, Adani Media Ventures said. He said the adoption of technology and the increased ability of our nation to consume information has dramatically transformed the way media is expected to disseminate authentic information.

“This is exactly what Adani Media Ventures aims to do. I have had the privilege of working with QBM’s talented, credible and diverse team. This relationship between AMV and QBM marks a strong beginning of Adani Group’s foray into Indian media,” he added.

QBM is a business and financial news company and operates a leading business news digital platform in India. QBM’s main content is based on the Indian economy, international finance, corporate law and governance and business news, amongst others through its platform Bloomberg | Quint. It has a subsisting content agreement with Bloomberg Television Production Services India.

“We are delighted to welcome the Adani Group as an investor in QBM. Given the proven execution record of the Adani group, their support to fulfill the ambitions of QBM will lay the foundation for accelerating the growth of the business and scale of QBM’s high quality content for the Indian audiences” Anil Uniyal, CEO, QBM said.

Meanwhile, in a separate filing the company said that Bloomberg Media and Quintillion Media will no longer co-produce content but will continue to distribute Bloomberg content in India through a license agreement. “The companies have ended their equity joint venture in favor of a new content license agreement,” it said.

Launched in 2017, the site combined Bloomberg’s global leadership in business and financial news and data, with Quintillion Media’s expertise in the Indian market and digital news delivery, to provide high quality business news, insights and trends for India’s audiences, the company said.

“We have valued our relationship with the Quintillion Media team. While we have mutually decided to shift the focus of our work together, Bloomberg Media remains committed to our presence in India and look forward to a continued relationship with Quint,” M. Scott Havens, CEO, Bloomberg Media said. Commenting on the development, Raghav Bahl, Co-founder, Quintillion Media said, “Our joint venture with Bloomberg Media was the embodiment of resilient energy. Our digital-only premium subscription product has quickly become the market leader. Even as our terms of engagement with Bloomberg Media have changed, we look forward to imparting a new energy and spirit to the new website”