Sinha reminded that the BJP had promised to give jobs to every household but less than five percent have been given outsourced and private jobs. 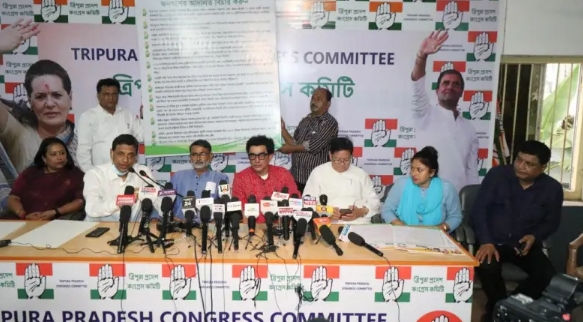 Agartala: To woo voters of four Assembly constituencies where by-elections are scheduled on June 23, the Tripura Pradesh Congress Committee (TPCC) on Thursday released a 13-point charge sheet against the ruling BJP, alleging non-compliance with commitments.

TPCC President Birajit Sinha slammed the government accusing it of “befooling” the people with “false promises”, “misleading’ talks, “corruption, and “violence” over the past 51 months. The by-election would be the “beginning of the downfall” of the BJP in Tripura and in next year’s assembly election a Congress-led government would be formed, he said.

Sinha reminded that the BJP had promised to give jobs to every household but less than five percent have been given outsourced and private jobs. “They were to give 50,000 jobs in the first year but did nothing, the government has given only three percent, while the central government employees were getting 31 percent. They had also promised to implement the 7th central pay commission for employees, but now we find they have cheated the employees”.

The BJP before assuming power had promised free education but now in the name of the ‘Vidyajyoti scheme’ the government is trying to extort money from the people, all the health infrastructure has been ruined and privatized, and road infrastructure was handed over to outside contractors, while the most profitable power corporation and industrial development corporation has become sick due to” large-scale corruption”, Sinha observed.

He added that the BJP has only “misled” the people by making absurd promises like bringing ships to the Tripura rivers, making the state a corridor of Southeast Asia, bringing investment for industries, and transforming the state into a health and education hub. The law and order situation of the state has been “reduced to zero”, as police are escorting BJP cadres while attacking the opposition, and not arresting criminals but instigating communal disharmony.

“Only a month ago Prime Minister Narendra Modi and Home Minister Amit Shah had certified Biplab Kumar Deb as a good performing Chief Minister of the county and within a month he was removed unceremoniously. People want to know why Biplab Deb had to be removed,” he asked.