The Assam Pradesh Congress Committee, while expressing their concerns, questioned the incumbent Party as to, why it is not providing relief to consumers and rapidly increasing excise duty, why are facts of BJP’s economic policies in the State, not made transparent to the public? 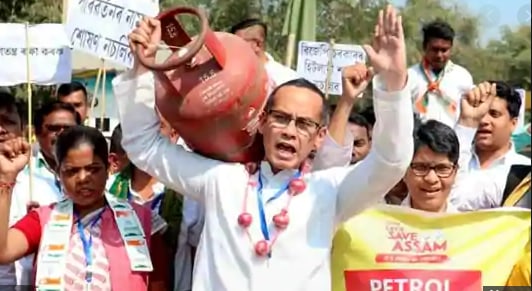 Guwahati: The Assam Pradesh Congress Committee Sunday launched agitations across all districts of the state to protest against the petrol price hike.

“The base price of petrol is Rs 33.46 per litre and that of diesel is Rs 31.82 per litre. However, the common man is forced to pay Rs 87 per litre for petrol and Rs 82 per litre for diesel in Assam. The BJP is simply looting the people in the name of taxes,” said Ripun Bora while addressing the protests in Hojai.

“Why is the BJP Govt hiding the knowledge of price control policies for price rise from the public? Why not come out clean and let people know why are decisions being enforced on them?” Bora asked in a Tweet.

Pradyut Bordoloi also took pot-shots at the Sarbananda Sonowal government in the state.

“I would simply like to ask BJP Govt- on what basis does it decide the petroleum prices every day? What is the explanation for subjecting people of Assam to this cruelty,” asked Bordoloi, in his Tweet.

“BJP Govt is mercilessly looting the public with hiked fuel prices- especially during a raging pandemic! On behalf of the people of Assam, I want to ask why this hike in petrol & diesel prices when international crude oil prices are low,” said Gaurav Gogoi in his Tweet.

“The common man is burdened by price rise, so will the BJP Govt clarify whom it is busy levying tax for? Who is this govt favouring at the expense of making people suffer so much,” asked Debabrata Saikia in a tweet.

“The so called ‘double engine’ BJP Govts are fooling the people of Assam. Reducing Rs 5 on Petrol-Diesel just before elections in Assam is a hoax! Reality is the Modi Govt at the Centre has increased tax to favour their Corporate friends,” said Sushmita Dev, while addressing the protest.

The Assam Pradesh Congress Committee, while expressing their concerns, questioned the incumbent Party as to, why it is not providing relief to consumers and rapidly increasing excise duty, why are facts of BJP’s economic policies in the State, not made transparent to the public?

“First BJP inflicts abject price rise on the people of Assam, then continues to hike fuel prices to deepen the blow- is this remotely worthy of being called governance? Why is BJP torturing the common man so bluntly,” asked Media and Communication Chief Abdul Khaleque in a tweet.