“Roybarman is out of danger and undergoing treatment,” said the attending doctor in the hospital. 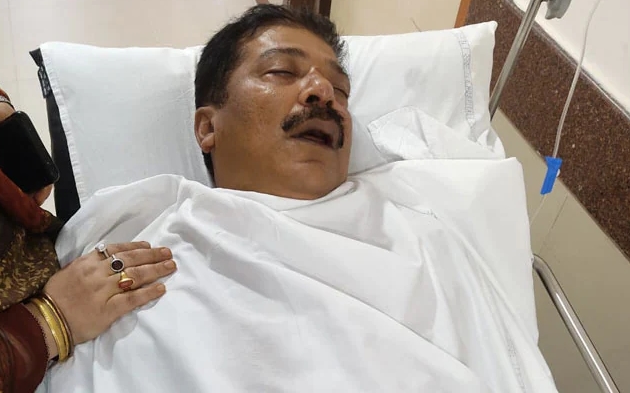 Agartala: Tension runs high in the city following an attack on Agartala Congress candidate and former BJP minister Sudip Roybarman at Abhoynagararea in his constituency on Sunday late night, which left him critically injured and has been shifted to a private hospital.

Allegedly, the incident happened in presence of some senior leaders of the ruling BJP where an unknown miscreant pelted bricks targeting Roybarman from a crowd. Two bricks hit his face causing injuries to the eyes, teeth, and nasal bone of Roybarman and immediately he was shifted to the hospital.

“Roybarman is out of danger and undergoing treatment,” said the attending doctor in the hospital. However, he would be in need of hospitalization at least for a day followed by a few days of bed rest.

Congress nominee from Bardowali and former BJP MLA Ashis Kumar Saha alleged that Roybarman had to move with a PSO and two others after getting anSOS call from Congress leader Alok Goswami around 11 PM after being attacked by BJP goons at his house.“

“As soon as he reached the spot, inebriated BJP cadres began stone pelting on Sudip Roybarman where a sizable number of policemen, Information minister and election in-charge of the constituency Sushanta Chowdhury and BJP candidate Dr. Ashok Sinha were present. When Roybarman’s security officer and driver rescued him in the vehicle, the miscreants threw stones in the car,” Saha alleged.

Meanwhile, information minister Chowdhury denied the allegation and said, “We rushed to the spot after getting the information of chaos in the area where Congress cadres mostly from outside attempted to attack the house of BJP Mandal president Hiralal Debnath. He was found accompanying a few arm-carrying miscreants and the situation went out of control and a stone hit Roybarman.”

However, Tripura Pradesh Congress Committee, TIPRA Motha supremo and royal scion Pradyot Kishore Debbarman, CPI-M state committee, and All India Trinamool Congress condemned the attack on Sudip Roybarman and demanded to arrest of the culprits immediately and ensure transparent and fearless election on June 23 next.