CoMSO stages protest in front of Meghalaya secretariat for ILP

The demonstration took the security agencies by surprise. The main gate was quickly shut to prevent the members from storming the Secretariat and the CoMSO activists stood outside the gate and raised slogans. 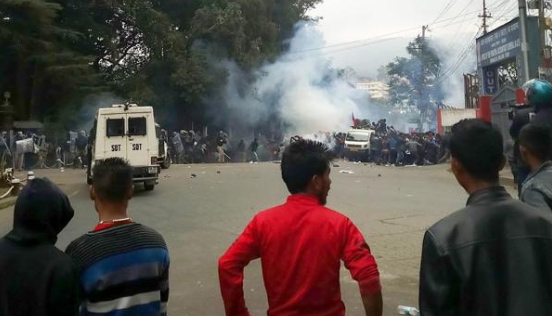 Shillong: Members from the Confederation of Meghalaya Social Organizations (CoMSO) on Friday staged a surprise sit-in-demonstration in front of the main Secretariat demanding immediate implementation of the Inner Line Permit (ILP) in the State.

The demonstration took the security agencies by surprise. The main gate was quickly shut to prevent the members from storming the Secretariat and the CoMSO activists stood outside the gate and raised slogans.

Incidentally, as the demonstration was taking place there was sharp downpour. The members however braved the rain and continued to raise the slogans for sometime before dispersing.

The activists numbering about 100 odd shouted slogans – “We want ILP, no ILP, no rest” and “MDA government down” – leading to the tension in the high security zone.

Chief Minister Conrad Sangma and other Cabinet Ministers were not in the Secretariat at that point of time.

CoMSO leader Roikupar Synrem said, the activists took to the street as the state Government seemed uninterested in implementing the ILP in the State.

ILP has not been implemented although the Meghalaya Assembly has unanimously passed a resolution urging the Government of India to implement it.

Although the members have targeted the State Government, it’s the Central Government which has not given its nod to implement the ILP in Meghalaya. Implementation of the ILP is a Central subject as it falls under the Central legislation, Bengal Eastern Frontier Regulation Act, 1873.

Union Home Minister Amit Shah is yet to hold discussions with the State leaders as well as members from the NGOs on the issue, despite promising to do so.

On the other hand all the political parties seem to be united on the issue and have been demanding from the Centre to implement ILP in Meghalaya.

Synrem also questioned the Central Government’s silence on the issue and demanded that New Delhi makes its decision clear whether it would implement the legislation.

“Today’s protest is only a beginning of what is yet to come in the days ahead. If the Government doesn’t take its demand seriously, they would be left with no option but to close down the secretariat,” Synrem said.