As it is clear from its name, the college is named after the country’s first President, the TOI reported. 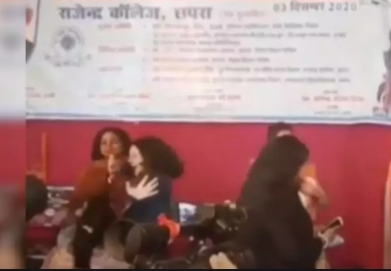 Patna: In a bizarre case, the principal and 12 assistant professors, four of them women, of Chhapra-based famed Rajendra College have been suspended for joining a ‘group dance’ on the tune of Haryanvi dancer Sapna Choudhary’s famous song ‘Teri Aakhya Ka Yo Kajal’ and some other item songs during a college function organized to celebrate the birth anniversary of country’s first President Dr Rajendra Prasad.

As it is clear from its name, the college is named after the country’s first President, the TOI reported.

In an order issued on Saturday, the Jai Prakash University’s (JPU) registrar said the college principal Pramendra Ranjan Singh and 12 assistant professors were suspended for “gross misconduct” and “their involvement in viral dance video of item songs on the occasion of Dr Rajendra Prasad birth anniversary.”

The incident of group dance by the college principal and a dozen of assistant professors, four of them women, took place on December 3, 2020 on the occasion of Dr Prasad’s birthday. As the college is named after Dr Prasad, it every year celebrates his birth anniversary at a grand level.

As per the findings in an inquiry ordered by the Bihar Governor-cum-chancellor Phagu Chauhan, while the main function was near to close, the principal and some college teachers ordered for playing of the famous Haryanvi song “Teri Aaakhya Ka Yo Kajal” and began dancing on its tune with dozen of teachers on the main dais, which was still holding the banner and posters about the birth anniversary of Deshratna Dr Rajendra Prasad. Some women assistant professors and even a few students also joined the group dance. The principal and college teachers also played some other item songs and continued their dance.

While they were dancing, some student and college staff made video of the group dance through their mobile sets and later made the videos of item songs viral on different social media platforms, prompting the Raj Bhawan to order an inquiry in the whole dance episode.

The suspended principal and 12 assistant professors have also been asked to reply within 15 days as to why departmental proceedings should not be initiated against them for “gross misconduct, dereliction of duty” and for their “involvement in the viral dance video of item songs.”