According to a CNN report, Cassandra Madison and Julia Tinetti, who met in 2013 while working at the Russian Lady restaurant in New Haven, Connecticut, immediately became friends, not realizing until years later that they were, in fact, sisters, News18 reported. 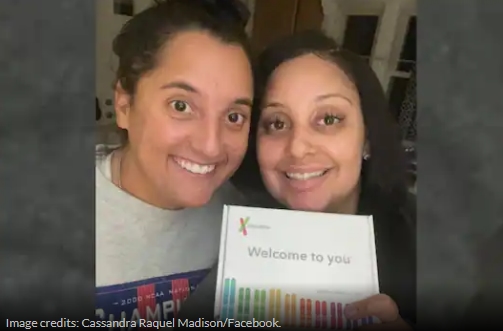 Hartford: Two women who were working at the same restaurant for years and bonded over being adopted have learned that they are biological sisters after a recent DNA test confirmed the same.

According to a CNN report, Cassandra Madison and Julia Tinetti, who met in 2013 while working at the Russian Lady restaurant in New Haven, Connecticut, immediately became friends, not realizing until years later that they were, in fact, sisters, News18 reported.

The pair got to know each other after realising they had a mutual connection to the Dominican Republic, where they were both born and adopted from.

The former co-workers, both sported tattoos of the Dominican Republic flag, were often told by customers and co-workers that they look alike, and they could be sisters. This was enough for them to wonder if they were related and the two women proceeded to compare their adoption papers, which didn’t match, as both were from different cities and their respective mothers had different last names. Even though dismayed about not finding a link, they still felt there had to be a connection between them.

In 2015, the pair ended up moving to different cities, but they stayed connected on social media. Then in 2018, Madison’s mother presented her a 23andMe DNA test for Christmas and with it, she was able to locate her biological father who still lived in the Dominican Republic. On a trip to the country to meet her father and other siblings, she was able to find out if he and her mother had given up any other babies besides her for adoption. Her father reluctantly admitted that Madison was not the only one of his nine children he had put up for adoption.

With all this information, Madison was convinced that Tinetti was the other baby and had her take the DNA test. When the results came back in late January, it was confirmed she and Madison were biological sisters and have the same biological parents.